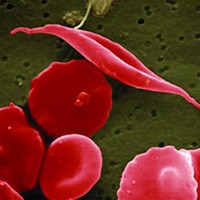 Blood is living tissue comprised of plasma (the liquid part of blood) plus red blood cells (RBCs), white blood cells, and platelets. Hemoglobin, a protein component of RBCs, carries oxygen from the lungs to the rest of the body. The production and maturation of RBCs takes place in the bone marrow in a process called erythropoiesis; blood disorders can disrupt this process. Sickle cell disease (SCD), one of the most common genetic disorders affecting erythropoiesis, is caused by a specific mutation in a gene that codes for the β-globin component of the hemoglobin protein. The mutated version of hemoglobin results in distorted RBCs (a sickle-like shape rather than a normal round shape). The result is ineffective erythropoiesis and anemia—a condition in which the blood has a lower than normal level of RBCs or hemoglobin, and, thus lacks an optimal amount of oxygen-rich blood. These sickled cells clump together and stick in small blood vessels, resulting in severe pain, blood cell destruction, stroke, pulmonary hypertension, and organ failure. Anemia may be caused by other reasons. For example, anemia is a common and significant complication of chronic kidney disease. NIDDK-funded research has made important strides in developing new treatments for diseases like SCD and understanding anemia. Research into how cells detect oxygen and react to low oxygen levels was selected as the 2019 Nobel Prize in Physiology or Medicine.