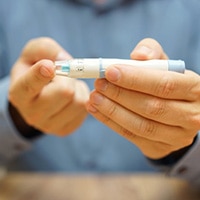 In people with type 2 diabetes (T2D), cells in muscle, fat, and liver tissue do not properly respond to insulin, a condition referred to as insulin resistance. As a result, the pancreas must compensate by producing more insulin. Gradually, however, the pancreatic β (beta) cells lose their ability to secrete enough insulin to compensate for the increased demand, resulting in blood glucose rising to levels that meet criteria for the diagnosis of diabetes. Diabetes increases risk for premature death, increases risk of cardiovascular disease, kidney disease, blindness, and numerous other serious complications. NIDDK research seeks to reduce the burden of this serious and all too common disease. Gestational diabetes (GDM) is a form of diabetes that appears in pregnancy. Untreated, any form of diabetes during pregnancy increases the risk of serious complications for the mother and baby before, during, and after delivery; and GDM increases the risk of T2D in the mother later in life.