NIH study is first to show clear evidence of a brain-to-beta cell circuit that regulates insulin secretion in mammals.

Led by NIDDK scientists, the study identified a neuronal circuit in mice that connects the brain to the beta cells of the pancreas – the cells that produce insulin. The researchers found that the circuit originates from a small set of neurons in the hypothalamus, which communicate with the pancreatic beta cells to control insulin production and monitor blood glucose levels in the body.

When blood glucose became low in the mice, the neurons activated and communicated to the beta cells to stop producing insulin, preventing glucose levels from falling any further. Conversely, when the neurons were silenced, insulin release increased, and blood glucose lowered. The findings, which were published in Cell Metabolism in February, suggest that the brain elicits such protective mechanisms to overcome extreme and uncontrolled hypoglycemia. The authors propose that further research identifying similar neural circuits will advance understanding of the brain’s role in regulating blood glucose and its impact on physiology and disease. 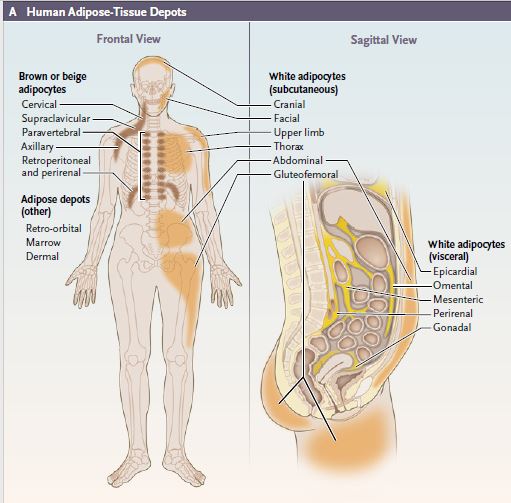 View full-sized imageIntegrating research from clinical, genetic, and epidemiological studies over the last ten years, a new review paper illuminates the multiple, diverse roles that human white and brown fat, or adipose tissue, play in people’s physiology, metabolism, and endocrine and immune systems. The author also describes fat’s lesser-known functions, as well as the impact of white and brown fat on obesity-related metabolic disease and opportunities for further research. Published in The New England Journal of Medicine in February, the paper encourages readers to appreciate fat as a dynamic organ that directly impacts their lives and health.

Led by NIDDK scientists, a recent study found that mice treated with a β2-adrenergic receptor agonist –the drug clenbuterol – led to significantly improved glucose levels in mice. The improvements were found to be primarily due to clenbuterol’s ability to activate β2-adrenergic receptors in skeletal muscle cells, which use up a majority of the body’s glucose. To test the drug, researchers administered clenbuterol in the mice’s drinking water for five days and followed up with a series of metabolic tests. Results showed clenbuterol improved glucose homeostasis and metabolic readings in mice drinking the treated water compared to mice drinking regular water. These findings suggest that drugs targeting β2-adrenergic receptors in skeletal muscle may be useful in treating type 2 diabetes. The study published in Nature Communications in January.

NIDDK researchers explored how an individual’s “trait affect” – their overall disposition towards certain moods or emotions – combined with their levels of food insecurity affected adherence to a dietary intervention. The results showed that, regardless of overall mood state, people were less likely to eat all the prescribed study food if they reported higher levels of food insecurity. People with more consistent negative emotions were more likely to consume food not prescribed by the study and were less likely to stick to the prescribed study food. This association was the strongest in participants with the highest levels of food insecurity. On the other hand, people with more consistent positive emotions were more likely to adhere to the prescribed diet. The findings, published in Obesity in January, suggest that early identification of mood (affective) traits and food insecurity issues could help clinicians address patient barriers to dietary adherence and lifestyle modifications.

The NIDDK-funded randomized clinical trial examined the effect of sleep extension on energy intake, energy expenditure, and body weight among 80 people with habitual sleep duration of less than 6.5 hours. The researchers found that when participants increased their sleep duration by an average of 1.2 hours over a 28-day period, they had a decrease in energy intake and experienced weight loss compared to participants who maintained their regular sleep habits. The team used objective measurement methods to ascertain energy intake and expenditure, body composition, and sleep duration, which was an important strength of the study. Published in JAMA Internal Medicine in February, the research highlights the importance and potential usefulness of sleep support as an additional tool in the toolbox for obesity prevention and weight loss programs.

An NIDDK-supported intervention shown to help first-time parents prevent childhood obesity has found spillover effects in second-born children as well, even without further training for the parents. The intervention, called Intervention Nurses Start Infants Growing on Health Trajectories (INSIGHT), teaches parents responsive parenting: how to interact constructively with their infant during feeding, bedtime, and play. INSIGHT is now the first educational intervention for obesity prevention of first children to demonstrate spillover effect to future children. Responsive parenting may be an important childhood obesity prevention strategy for families and an effective way to promote healthy growth in children. The findings were published in December in Obesity.