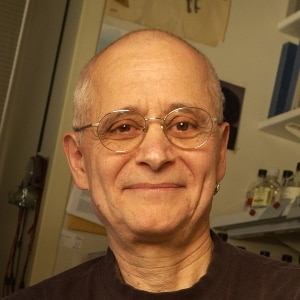 (1) Understanding replication of the L1 retrotransposon, an intragenomic parasite that has generated at least 50% of human DNA and is still active in modern humans. (2) Understanding the derangements in DNA repair that can induce mutations in normal flanking DNA.

Mammalian L1 elements are obligate intragenomic parasites that replicate (retrotranspose) by copying their RNA transcripts (and those of other genes) into genomic DNA, a reaction that is mediated by two L1 proteins, ORF1p and ORF2p, which are regulated by the L1 5’ untranslated region (UTR). L1 has been amplifying and evolving in mammalian lineages for approximately the last 100 million years. During this time at least 16 successive L1 families arose, only to have gone extinct and then be supplanted by a novel active family. Having generated at least 50% of human DNA, L1 activity has had a defining effect on the evolution, structure, and function of the human genomes. Despite being seriously deleterious and a target of numerous host repressive mechanisms, L1 activity and evolution is ongoing in modern humans, where it can damage DNA and cause genetic defects. It can also be re-activated in somatic cells including tumors, neuronal progenitor cells, and consequent to aging. Not only can L1 insertions cause genetic defects, but, as ORF1p activity depends on phosphorylation of its conserved protein kinase target sites, it can compete for or perturb the critical phosphokinase cascades.

Given its generally deleterious, and sometimes catastrophic effects accounting for the persistence of L1 is a major issue for mammalian biology. Foundational, studies showed that evolutionary change in L1 was often associated with the emergence of novel L1 families: both the emergence of novel 5’UTR regulatory sequences and recurrent instances of sequence change of the ORF1p coiled coil. The latter instances were generally considered adaptive changes in the ongoing "arms race" between L1 and its host. Determining the contestants in this arms race would reveal a major aspect of L1/host interaction. But our newest findings posit an alternative evolutionary model. Most coiled coil substitutions did not affect ORF1p function, and being “hidden” from selection their accumulation increased the sequence diversity of functional ORF1p. So, coiled coil novelty proceeded not by traversing discrete adaptive states but by sampling related networks of functional sequences, which buffered ORF1p from random epistatic inactivating mutations, an evolutionary strategy that could ensure L1 survival. These findings have implications beyond L1 as coiled coils are both prone to such mutations and very common in other proteins, notably coronavirus spike proteins.

L1 DNA provides historical record of genetic change - Additionally, the DNA inserts of the extinct L1 families remain in the genome where they accumulate mutations at the neutral mutation rate. They thereby represent an unparalleled source of DNA fossils that provide a genetic record of its host, our analysis of which prompted our hypothesis the DNA repair can be mutagenic, which we demonstrated experimentally and which now constitutes one of our major pursuits.

As mammals have coevolved with the L1 parasite, understanding the biochemistry of L1 replication is essential to fully understand the biology of mammals, and assessing the potential, and perhaps existential, effect of L1 on current and future human populations. More particularly, in addition to having already massively altered the structure of mammalian genomes, L1 activity in present human populations is sufficiently active to have reduced their genetic fitness. While de novo in utero L1 insertions are an important cause of genetic defects, ongoing L1 activity not only constitutes a nonending assault on the genetic integrity of human genomes, but it also continually generates evolutionary novel L1 elements that could wreak havoc on human populations if they can evade host mechanisms that repress them. Such an event would be much like the emergence of a deadly pandemic-producing novel strain of influenza virus or more recently coronavirus. By analyzing the evolutionary strategies that ensure L1 persistence we enlarge our biochemical understanding of biological processes as biochemistry is the ultimate arbitrator of and substrate for evolution.

Equally relevant to the genetic well-being of human populations is determining the factors that affect the neutral mutation rate (the rate at which base substitutions accumulate). Base substitutions are a major source of genetic variation and genetic diseases, and alterations of the base substitution rate accompany the progression of many cancers. Our suggestion that DNA repair itself could be mutagenic has profound implications for understanding the determinants of the neutral mutation rate, for the use of this rate in evolutionary studies, and for analyses that rely on sequence conservation, or lack thereof, as a proxy for natural selection. We have now supported this idea experimentally in vivo using a system wherein we can introduce defined DNA lesions in various sequence contexts and showed that their repair induces mutations in normal flanking DNA. This system constitutes an invaluable asset for the biochemical analysis of repair-induced mutagenesis, for analyzing the mutational propensity of different human cancers, and their implications for human disease and therapeutics.

Retrotransposons are genetic parasites that are integrated into the DNA of all organisms studied to date, with the exception of strictly asexual organisms. The dominant retrotransposon in most mammals is L1, and like a virus, it can replicate independently of its host, make multiple copies of itself and cause harm. Consequently, natural selection will favor host processes that thwart L1 activity, but natural selection acting on L1 will also favor variants that can escape host defenses. Eventually, L1 and its host should be in balance, but it may not last. In fact, very early in mammalian evolution, this balance changed dramatically. Unlike in non-mammalian species, where L1-generated DNA represents approximately 5 percent of genomic DNA, in mammals it accounts for approximately 50 percent of the DNA! This actuality prompts a number of questions: What happened to either L1 or its host to account for the success of mammalian L1? How did this event change the biological properties and evolutionary history of both mammals and, in turn, L1 itself?

We carry out two types of studies on L1 elements. The first one is aimed at understanding the biochemical properties and role in L1 replication of the L1-encoded ORF1 protein. The second one uses the L1 insertions laid down by now-extinct L1 families to study factors that affect the mutation rate. This work resulted in the startling conclusion that DNA repair itself can cause mutations in nearby normal, undamaged DNA. We have now demonstrated this experimentally and are intensively studying this process.