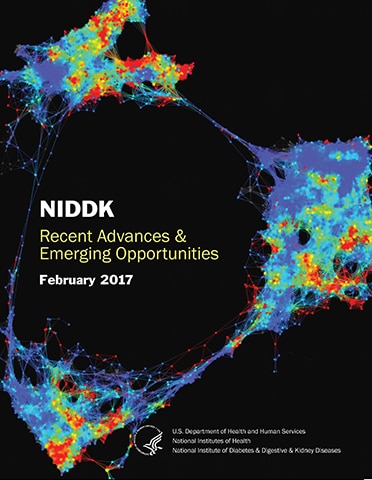 NIDDK Recent Advances & Emerging Opportunities is a report that the NIDDK has issued annually since 2001. It is a compendium that highlights examples of the many research advances published by NIDDK-funded scientists and their colleagues in the most recent fiscal year, along with the technologies that made these achievements possible. Thus, most of the research findings described in the January 2017 compendium were published in fiscal year 2016. In addition to research advances, the compendium includes:

This publication is one means of conveying the important accomplishments that have resulted from NIDDK-funded research, as well as the enormous promise this research holds for the future. The examples given here are representative of the much larger and more diverse research portfolio funded by the NIDDK. This compendium is a web-based publication, which is also presented to the NIDDK's National Advisory Council in printed form each January or February.