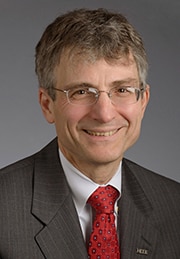 Office of the Director

The Institute’s Deputy Director and Director have ultimate authority and oversight for the entire organization including both the Scientific and Administrative components. The NIDDK Office of the Director provides policy guidance, program development and evaluation, and overall operational and administrative coordination for the Institute. The Deputy Director helps implement the Director’s strategic vision and manages the Institute’s activities. He chairs multiple Institute working groups, oversees evaluations of external and internal programs, and helps coordinate multiple trans-institute activities. He also represents the Institute on multiple trans-NIH committees.

The Deputy Director maintains relationships with the Director of the NIH as well as with other sub-agencies of the Department of Health and Human Services (DHHS), other Federal agencies, Congress, and a variety of public interest groups.

Prior to joining NIDDK, Dr. Germino was a physician-scientist at the Johns Hopkins University where he directed the Johns Hopkins Polycystic Kidney Disease (PKD) Center, served as a consultant attending on the renal service, and was an invited lecturer at medical schools and hospitals both nationally and internationally. He served on and chaired multiple university committees and was a member of several editorial boards and grant review panels for numerous institutional, NIH, foundation, and international funding organizations. In addition, he served on the Scientific Advisory Board of the Polycystic Kidney Research Foundation, was a Councilor of the American Society of Clinical Investigation, and a member of the Board of Directors of Federation of American Societies for Experimental Biology. He has received multiple awards including an NIH MERIT Award, induction into the Association of American Physicians, and the Lillian Jean Kaplan International Prize for the Advancement in the Understanding of Polycystic Kidney Disease.

He received his undergraduate degree in biology from Loyola University of Chicago, his medical degree from the Pritzker School of Medicine at the University of Chicago, and his clinical training in internal medicine and nephrology at Yale University. He spent a year training in research at Oxford University (UK) before returning to Yale as a junior faculty member for another four years. He joined the faculty at the Johns Hopkins School of Medicine in 1992 and became a full professor in 2003.

Dr. Germino is a Senior Investigator in the Kidney Disease Branch of the NIDDK Division of Intramural Research. The main focus of his research is on the molecular basis of renal cystic disease, such as autosomal dominant polycystic kidney disease (ADPKD), one of the most common inherited disorders and cause of 4-5 percent of all end stage kidney disease in the United States. Individuals with ADPKD also suffer from other complications such as hypertension, cyst infections, abdominal pain, and have an increased risk of intracranial aneurysms. Present ADPKD management is focused on treating symptoms. Understanding the mechanisms of ADPKD will allow us to develop safe and effective treatments.