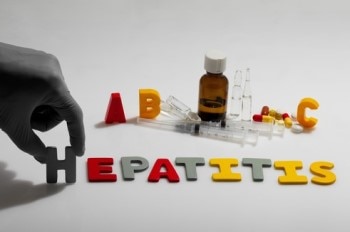 Scientists in the NIDDK’s Intramural Research Program showed that a new antiviral drug, called fluoxazolevir, effectively fights infection by many types of hepatitis C virus, when given in combination with approved antiviral drugs in animal models. Hepatitis C is the most common chronic viral infection from a blood-borne pathogen in the United States. It can lead to damaging inflammation and liver disease, including cirrhosis, liver failure, and cancer. Current treatments with one or more drugs specifically targeting the virus are highly effective, with response rates of over 90 percent. Research efforts continue, however, to develop treatments for people infected with viral subtypes, or genotypes, that are less responsive to available drugs, and for viruses that develop drug resistance.

The researchers defined how fluoxazolevir blocks the hepatitis C virus from entering a human liver cell line in culture by blocking attachment with the outer membrane of the cell. The drug was effective in protecting the cells against infection with several viral genotypes. In male mice, rats, and dogs, the drug localized to the liver, an indication of potentially fewer side effects in other tissues. Additional testing in male mice transplanted with human liver cells showed that a 4-week treatment with the drug suppressed levels of multiple viral genotypes, without toxic side effects. When fluoxazolevir was given to the mice together with an antiviral drug already approved to treat hepatitis C, the combination treatment led to undetectable viral levels, indicating a sustained response to treatment that was not seen with the approved drug alone. This response was seen with infections by different viral genotypes, and no signs of viral drug resistance were observed. A longer 6-week treatment with fluoxazolevir in combination with two approved drugs for hepatitis C resulted in a sustained treatment response in mice infected with a drug-resistant strain of hepatitis C. Fluoxazolevir also showed promise at partially preventing hepatitis C, blunting viral levels when given prior to infection.

These studies demonstrate that the new drug fluoxazolevir, in combination with antiviral drugs already approved for hepatitis C, can achieve a sustained response against different genotypes of hepatitis C virus, with a shorter and potentially less costly treatment duration compared to current regimens and less chance of developing viral drug resistance. In combination with approved antiviral drugs, fluoxazolevir may represent a next generation treatment for hepatitis C.