Succinate Regulates Muscle Adaptations to Exercise in Mice and Humans 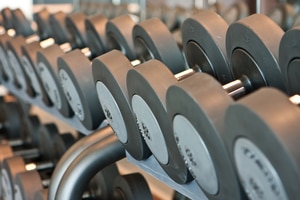 Researchers have identified succinate, a small molecule produced through metabolism, as a signal in both mice and humans that triggers muscle remodeling and strength-building in response to exercise. Muscle remodeling is the mechanism by which we get stronger in response to exercise, and it is thought to have other health benefits as well. Muscle adaptations require rapid cell-to-cell communication, but the signals originating from the contracting muscle that drive these processes are unknown.

In this study, researchers used small-molecule analysis to track the accumulation of metabolites secreted into the fluid between cells and into the circulation from acutely exercised muscle in both mice and humans. First, mice were exercised on a treadmill, and muscle samples were isolated and analyzed. In addition, the researchers recruited young, healthy men of normal weight and collected blood samples (which can be used to study the fluid composition between muscle cells) while the men exercised on a bicycle for 1 hour and during recovery. Notably, the researchers discovered that succinate was selectively and rapidly released by both mouse and human muscle during exercise—an unexpected finding since succinate was not previously thought to be able to move freely out of cells. However, during exercise the interior of muscle cells becomes transiently and mildly acidic and in this acidic environment, succinate is converted into a form that can be transported out of the muscle cells- by acid-dependent succinate transporters. Once released from the contracting muscle cells, succinate binds to the protein SUCNR1, which is present on non-muscle cells also located in the muscle (tissue or fiber). Following acute exercise, the succinate-SUCNR1 binding then sends a signal that is critical to induce muscle remodeling and muscle strengthening. Importantly, the succinate-SUCNR1 signaling also appears to be associated with another benefit of exercise—improved insulin sensitivity—and the research team found that the extent of this effect correlated with the peak exercise succinate concentration in humans.

This study suggests that succinate may play a key role as a signal that mediates muscle adaptation and remodeling responses to exercise. Further research could provide insight into whether dietary succinate supplementation or other therapeutic approaches could trigger the succinate-SUCNR1 signaling pathway to initiate muscle adaptations similar to those seen through exercise, and whether it is safe to do so.