Celebrating the discovery and development of insulin 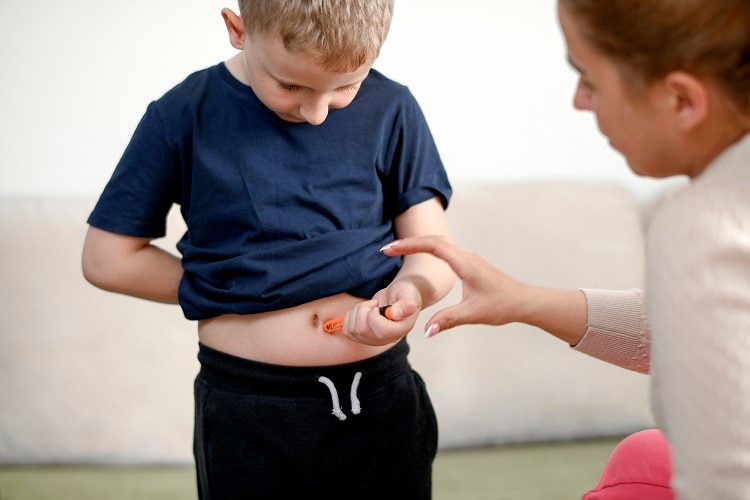 The discovery of insulin led to its production as a commercially available lifesaving treatment for people with type 1 diabetes. iStock.com/dmphoto

This year marks the 100th anniversary of the discovery, in 1921, of insulin, a hormone required for the body to absorb glucose (sugar), the main cellular fuel. The loss of insulin is the hallmark of type 1 diabetes, and, in individuals with type 2 diabetes, there is a relative lack of insulin compared to the body’s needs. Without insulin the body is not able to maintain normal metabolism, resulting in high blood glucose levels and a severe catabolic (a breakdown of molecules such as proteins or lipids) state. The discovery of insulin led to its production as a commercially available lifesaving treatment for people with type 1 diabetes. Continued research to understand the insulin molecule—its structure and function—has led to new formulations and technologies that have improved the lives of people with the disease.

Discovery of Insulin
The discovery of insulin was built on decades of research around the world enabling scientists at the University of Toronto to extract the molecule from animal pancreata and, by injecting it into a dog model of diabetes, demonstrate its importance in the disease. More research was required, though, before the discovery could help people with type 1 diabetes; researchers needed to figure out how to purify the insulin and, eventually, how to produce sufficient quantities for the demand. It was not long, however, before this discovery would change the lives of people with type 1 diabetes, extending life expectancy considerably and improving quality of life.

In 1923, the first commercial insulin product was produced. Though this insulin was life-saving, it was far from perfect. It was extracted from animal pancreata and thus was not human insulin, was difficult to purify and produce, was unstable, and did not last long in the body. Scientists continued to study insulin to develop solutions to these problems. For example, a decade later, they discovered that the addition of the molecules protamine and zinc produced a long-acting animal insulin that required fewer injections throughout the day.

Development of Insulin Analogs
NIDDK support of research on insulin has spanned decades and made possible many advances to move the field forward. Another key milestone in insulin research occurred in the late 1970s when researchers developed the ability to produce so- called “recombinant” human insulin. Identifying and sequencing the gene that encodes insulin and determining the structure of the insulin protein were critical research feats that laid the groundwork for this improvement. Thus, based on knowledge of the human insulin gene, this recombinant insulin could be produced in large quantities in bacteria in the laboratory. This breakthrough increased production of insulin, improved purification, and eliminated the dependence on animal-derived insulin and the accompanying allergic reaction that some people had to it.

Despite its life-saving ability, insulin therapy remained a considerable burden for people with type 1 diabetes. For example, its dose needed to be calculated carefully and injected by syringe into fat in the body, limiting how quickly the body would respond. A miscalculation of too much insulin could lead to dangerously low blood glucose levels (hypoglycemia) with serious consequences, and a delay in insulin injection could lead to higher blood glucose levels (hyperglycemia) after meals. Without adequate control of blood glucose levels over time, the risk for diabetic complications increases significantly.

Armed with knowledge of the sequence and structure of insulin, scientists experimented further, modifying single amino acids (the building blocks of proteins) of the insulin protein and studying whether these modifications altered insulin’s action or stability. Such studies led to the development of analogs—synthetic forms of insulin that have minor structural changes but perform the same action in the human body. Today there are many analogs on the market that provide different advantages. For example, fast-acting insulin is absorbed quickly into the blood stream and can be used to correct high blood glucose levels and at mealtimes when blood glucose levels rise because of food intake. Long-acting insulin is absorbed more slowly, lasts longer, and is used to control blood glucose both during the day between meals and overnight. Additionally, the development of insulin pumps—small, computerized devices worn on the body that deliver insulin—have aided diabetes management. These technologies can provide people with type 1 diabetes more reliable blood glucose control, though challenges to their use remain.

The Future of Insulin and Diabetes Management Technologies
NIDDK-supported scientists continue to study insulin with the goal of improving its usability. On the horizon are insulins that are ultra-rapid acting or highly concentrated that could be delivered by a patch rather than a bulky insulin pump. These insulins would also improve diabetes management technologies developed with NIDDK support such as artificial pancreas technologies, which combine a continuous glucose monitor with an insulin pump and a computer algorithm to automatically control blood glucose levels. Scientists are also trying to develop thermostable formulations of insulin so that refrigeration is not required. Not only would this generally make insulin easier to use, especially where access to refrigeration is an issue, but it would also enhance its use in technologies like the artificial pancreas. Efforts are also under way to develop a glucose- responsive insulin—an insulin that remains inactive in the body until activated in response to rising blood glucose levels—to more closely mimic the body’s own regulation.

NIDDK-supported research aims to improve the technologies available, including insulin, as well as develop and test next-generation diabetes management devices that are smaller, easier to use, and could be available to all people with this disease. This could allow people with type 1 diabetes the ability to choose which device and insulin fits their needs—personalizing this treatment while reducing burden, controlling blood glucose levels, reducing risk for diabetic complications, enhancing quality of life, and improving health. One hundred years ago, a diagnosis of type 1 diabetes meant a significantly decreased life span. Today, people with type 1 diabetes are living longer and healthier lives enabled by research on insulin. Future strategies to make disease management easier for everyone will continue to improve lives and provide hope as researchers work toward the goal of a cure for type 1 diabetes.