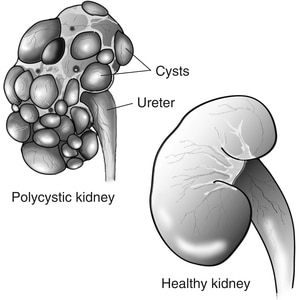 A recent report described a previously unknown role of exosomes in the progression of polycystic kidney disease and identified a compound capable of delaying cyst growth in mouse models of the disease. Autosomal dominant polycystic kidney disease (ADPKD) is the most common genetic cause of chronic kidney failure; most people with the disease have mutations in the PKD1 gene. ADPKD is characterized by the growth of numerous fluid-filled cysts in the kidneys. Over time, growth of these cysts results in enlarged kidneys in which normal tissue is displaced and kidney function is impaired, sometimes quite severely. The fundamental processes that control ADPKD progression remain elusive. The exosome is a tiny sac-like structure that is formed inside a cell and contains some of the cell’s proteins, DNA, and RNA. Many types of cells contain exosomes which are released into the blood or urine. Exosomes, therefore, can serve as cellular messengers as they transfer proteins, DNA, and RNA into other cells. Exosomes have received much attention lately for their involvement in human diseases such as cancer, but the role exosomes may play in some other diseases, such as ADPKD, is currently unknown.

Researchers have now shown that exosomes obtained from the urine of people with ADPKD stimulated a significant increase in the number of mouse kidney cells (i.e., increased proliferation) in cell culture compared to exosomes obtained from healthy people. These results suggested that ADPKD urinary exosomes contain a critical factor(s) capable of activating PKD-associated signaling pathways to ultimately increase kidney cell proliferation, which in turn could contribute to the growth of cysts. Intriguingly, mouse kidney cells treated with urinary exosomes from healthy people formed kidney-like tubule structures in three-dimensional gels while mouse kidney cells treated with urinary exosomes from people with ADPKD formed cyst-like structures in gels. Treatment with exosomes obtained from mouse cells containing Pkd1 gene mutations promoted cyst growth in a mouse model of ADPKD compared to the same mouse model not treated with exosomes. Furthermore, the exosome inhibitor GW4869, which blocks exosome release into the blood, delayed cyst growth in a mouse model of ADPKD. The results of this study suggest that targeting exosome secretion may be a potential therapeutic strategy to reduce or delay cyst formation in people with ADPKD.