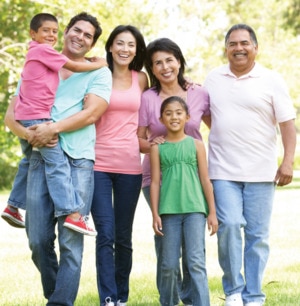 Researchers have found that type 2 diabetes self-care may be improved by addressing the role of family and friends. Effective treatment of diabetes requires a long-term effort by the individual to take medications correctly and on time, and to manage diet and physical activity in a health-promoting way. Family and friends can be powerful allies in facing these challenges, but they can also have negative effects, such as by encouraging unhealthy meal choices or discouraging exercise. In a study of about 500 female and male adults with type 2 diabetes, researchers were investigating whether an intervention called REACH, which involves sending individualized text messages about type 2 diabetes self-care to participants’ mobile phones, could improve diabetes self-care behaviors. A large percentage of the study participants were from racial and ethnic minority populations, and many had low income and were underserved. Half of the participants were assigned to the REACH group, and half received standard care (the control group). This study demonstrated that REACH resulted in short-term improvements to medication adherence and blood glucose control.

In an ancillary study, researchers further divided the REACH group into two groups, one of which continued in the original REACH program. The other, designated REACH+FAMS, received one-on-one coaching to help them set self-care goals along with suggestions for ways both to achieve more helpful support from friends and family and to reduce harmful interactions. This group also received individualized text messaging support related to the goals established in the coaching sessions, so their text messages were different from those sent to the REACH-only group. The REACH+FAMS participants also were invited to nominate a friend or family member to serve as an ally in their diabetes self-care; this part of the intervention was optional, and as such, only 42 percent of the REACH+FAMS group had allies involved in the study who received text messages designed to help the study participant achieve self-care goals. After 6 months, the REACH+FAMS participants had improved family/friend involvement in their self-care, did better in some measures of self-care, and had a better diet, on average, than participants in either the control or the REACH-only groups, although there were no statistically significant differences in exercise between the three groups. These results suggest that coaching and mobile technology might be valuable for helping people with type 2 diabetes take better care of themselves and adopt a better diet by improving interactions with family and friends.