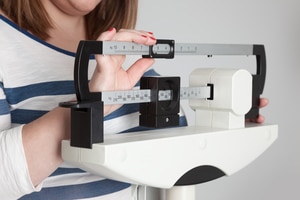 A new analysis of genetic data sets has revealed regions of the genome that are linked to both elevated levels of body fat and protection from some of the negative health impacts of obesity. Obesity is a major risk factor for cardiometabolic diseases such as type 2 diabetes, heart disease, and related conditions, and people living with obesity tend to have unhealthy glucose (sugar) and lipid levels in their blood and high blood pressure. But scientists have observed that up to 45 percent of people with obesity have healthy blood pressure and blood glucose/lipid levels, and therefore may not be at high risk of diabetes and cardiovascular disease. The reasons why this group of people remains healthy have been poorly understood.

To determine whether genetics may play a role, a team of researchers analyzed data from hundreds of thousands of people, mainly of European descent, who had previously been assessed for body fat and disease risk markers. They identified 62 regions of the genome that have a seemingly paradoxical association of increased risk of obesity and favorable effects on cardiometabolic outcomes. Genes identified within these regions point to both known and novel ways in which excess body fat can become uncoupled from cardiometabolic diseases. For example, some of these body fat-increasing genes are associated with storage of the excess fat beneath the skin, as opposed to storage around the internal organs where fat is metabolically harmful. Further analyses identified genes that are functionally implicated in improved blood glucose levels, insulin signaling, regulation and development of fat cells, and energy (calorie) expenditure. Moreover, genes were identified that are linked to both increased body fat and changes in the nature of some of the fat tissue, from calorie-storing “white” fat to a form called “brown” or “beige” fat, a process that can increase calorie burning and promote healthy metabolism. These results are helping to clarify the complex genetic underpinnings of obesity, and the genes identified may represent targets for new therapies to reduce cardiometabolic risk associated with excess body fat.