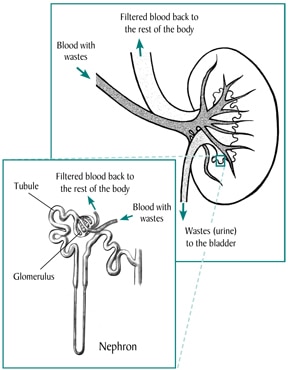 Researchers have found that the protein KIM-1 plays a critical role in progression of diabetic kidney disease (DKD) and thus may serve as a promising therapeutic target. Diabetes is the most frequent cause of chronic kidney disease. DKD generally has been thought to result from damage to the glomerulus, which is a specific segment in each of the kidney’s roughly one million nephrons (functional filtration units). However, abnormalities in a different segment of the nephron called the proximal tubule (PT) may appear earlier than glomerular injury during DKD progression. Previously, researchers discovered that a protein called kidney injury molecule-1 (KIM-1) was associated with PT damage at early stages of DKD, and found that elevated levels of circulating KIM-1 predicted disease progression in people with type 1 diabetes. These and other findings suggested a PT-specific role for KIM-1 in DKD progression.

The scientists have now extended their previous research, reporting that KIM-1 protein levels in kidney PT cells were higher in biopsy samples from people with DKD (1 female, 6 males) than from people with other forms of kidney disease that do not exhibit tubule damage (3 females, 2 males). The scientists conducted a series of experiments with cultured cells, as well as with mouse models of diabetes, and showed that KIM-1 is required for PT cells to take up (i.e., to bring materials from the outside to the inside of the cell) a protein called albumin only when it is bound by a specific fatty acid known as palmitic acid (PA). The scientists showed that PA-albumin uptake leads to PT cell injury, as well as other types of kidney damage. Furthermore, genetic deletion of a portion of KIM-1, resulting in a nonfunctional protein, prevented DKD in an experimental model of male mice, suggesting that KIM-1 is required for kidney injury and resulting disease. The scientists then tested more than 14,000 small molecules for their ability to prevent KIM-1-mediated PA-albumin uptake in cultured cells, and identified TW-37 as a candidate molecule. Mice treated with TW-37 were protected from PA-induced kidney damage, as were human kidney cell aggregates tested in culture. Together, these findings strongly implicate KIM-1 as a potential therapeutic target in people with DKD, and TW-37 could be a promising candidate as a small-molecule drug. Additional studies are needed to explore these possibilities.