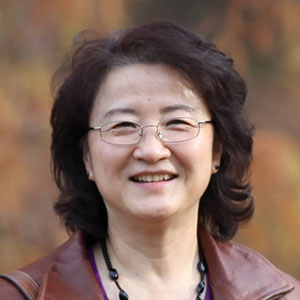 The incidences of obesity and diabetes are approaching epidemic proportions.  Our ultimate goal is to delineate the mechanisms by which G proteins control of food intake, energy expenditure, and glucose metabolism, which may lead to development of therapeutic treatments for obesity and diabetes.

Gsα is a ubiquitously expressed G protein α-subunit that mediates receptor-stimulated cAMP generation. Genetic and epigenetic abnormalities in the Gsα gene GNAS underlie several diseases, including McCune-Albright syndrome, endocrine tumors, and pseudohypoparathyroidism (PHP/Albright hereditary osteodystrophy [AHO]). In addition to skeletal and neurocognitive abnormalities, AHO is also a monogenic obesity disorder in which obesity only occurs when the Gsα loss-of-function mutation is on the maternal allele. These parent-of-origin effects are due to the fact that GNAS is affected by genomic imprinting, an epigenetic phenomenon leading to parental allele-specific differences in gene expression.

Metabolic syndrome (obesity, diabetes, dyslipidemia) is an increasing public health problem. Monogenic obesity syndromes like AHO provide important insights into genes involved in more common forms of obesity and how these genes regulate metabolism. One of the themes of our research is to understand the role of Gsα in regulating energy and glucose metabolism. Consistent with findings in AHO patients, we showed that mice with a heterozygous germline Gsα deletion on the maternal allele develop obesity, insulin-resistant diabetes, and hypertriglyceridemia due to reduced sympathetic nervous system activity (SNA) and energy expenditure, with no primary effect on food intake, while paternal deletions had a minimal effect on metabolism.  Our studies on tissue-specific Gsα mouse models indicate that the parent-of-origin metabolic effects of Gsα mutations do not result from Gsα deficiency in liver, muscle, or adipose tissue. In fact, central nervous system (CNS)-specific Gsα deletion on the maternal allele leads to severe obesity associated with low SNA and energy expenditure without hyperphagia, and insulin-resistant diabetes before the onset of obesity. Among brain regions related to the control of energy balance, we found that Gsa is imprinted in the paravebtricular nucleas of hypothalamus (PVN) and the dorsomedial nucleus of hypothalamus (DMH), but only Gsa deficiency in the DMH underlies obesity associated with Gsa mutations.

Melanocortins act in the CNS via Gsα-coupled receptors (MC4R) to promote negative energy balance by inhibiting food intake and stimulating SNA and energy expenditure. MC4Rs are expressed in many CNS regions and MC4R mutations are the most common cause of human monogenic obesity.; As Gsα mutations do not affect baseline food intake or the ability of melanocortins to inhibit food intake, it is possible that other MC4R-coupled G proteins are responsible for the melanocortin-inhibited food intake. We are presently exploring the G protein pathways mediating the effect of MC4R on food intake.

Obesity is a major public health concern due to its association with serious complications, including type 2 diabetes and cardiovascular diseases. An imbalance in energy intake and energy expenditure results in a disruption of energy homeostasis, ultimately leading to obesity. Studying monogenic obesity disorders, such as AHO caused by Gsα mutations can provide important insights into genes involved in more common forms of obesity and how these genes regulate metabolism. Better understanding the etiology of obesity may be beneficial for developing therapeutic treatments for obesity.

Further research is needed to determine the mechanism underlying metabolic abnormality resulted from the Gsa mutations, and how central melanocortins control energy balance and glucose metabolism via Gsα-dependent and Gsα-independent pathways.

Obesity and diabetes contribute to illness and death. Scientists are trying to understand how the body controls energy, glucose, and insulin. This knowledge will help them develop new treatments. In many tissues, cells have a particular type of protein—called Gsα—that influences these processes by mediating signals from hormone and neurotransmitter receptors. Gsα also plays multiple roles in the development of fat tissue, the function of the pancreas, and regulation of glucose metabolism by the liver. Additionally, this protein affects brain pathways that control energy balance and glucose metabolism.

Our research group investigates how Gsα regulates metabolism. In these studies, we use mice that lack Gsα due to genetic mutations. We focus on how Gsα disruption influences tissues involved in obesity and glucose intolerance. Our results show that lacking Gsα in liver, muscle, or fat tissues has important effects on metabolism, but does not cause these metabolic effects seen in Albright hereditary osteodystrophy patients with Gsα mutations. Instead, loss of Gsα in the central nervous system contributes to these metabolic effects. Our results show that different G proteins may influence energy and glucose metabolism through different mechanisms. Hopefully in one day, scientists may use our findings to develop medications for obesity and diabetes.