Our research focuses on mechanistic aspects of retroviral DNA integration. After entering the host cell, a DNA copy of the viral genome is made by reverse transcription. Integration of this viral DNA into a chromosome of the host cell is an essential step in the retroviral replication cycle.

The key player in the retroviral DNA (deoxyribonucleic acid) integration process is the virally encoded integrase protein. Integrase processes the ends of the viral DNA and covalently inserts these processed ends into host DNA. These reactions are catalyzed within a nucleoprotein complex between integrase and viral DNA ends called the intasome. We study the molecular mechanism of these reactions using biochemical, biophysical, and structural techniques. Currently approved drugs that target HIV-1 DNA integration target the intasome. Recent efforts have focused on biochemical and structural studies of HIV-1 intasomes. High-resolution structures of HIV-1 intasomes are needed to understand the detailed molecular mechanism of how these drugs act and how the virus can escape by developing resistance. We have devised methods to make HIV-1 intasomes amenable to structural studies by high-resolution cryo-electron microscopy. We now have high-resolution structures of HIV-1 intasomes in complex with all the currently FDA approved integrase inhibitors and are now focused on studying how mutation in HIV-1 integrase can confer drug resistance.

This research will help the public with understanding the mechanism of action of HIV-1 integrase inhibitors and how the virus is able to develop resistance and guide the design of improved inhibitors.

We use biochemical, biophysical, and structural techniques such as cryo-electron microscopy to improve our understanding of how one type of virus, the retrovirus, proliferates and thrives. HIV-1 (human immunodeficiency virus) is an example of a retrovirus. Unlike most living things, viruses do not have cells that divide; new viruses are assembled in the infected host cell. The host cell is then forced to produce many thousands of identical copies of the original virus.

Deoxyribonucleic acid (DNA) contains the instructions needed for an organism to develop, survive, and reproduce. To carry out these functions, DNA sequences must be converted into messages that can be used to produce proteins. In most viruses, DNA is transcribed to ribonucleic acid (RNA), and then RNA is translated into protein. Retroviruses function differently. The RNA of retroviruses is reverse transcribed into DNA, which is integrated into the host cell’s genome and then undergoes the usual transcription and translational processes to express the genes carried by the virus.

We focus especially on the role of one key protein: integrase. By what means does it process the ends of the viral DNA and insert them into host DNA? How can this process be interrupted? How do drugs that block HIV-1 replication by inhibiting integrase work? How can HIV-1 escape drugs by evolving resistance and how might improved drugs be developed. 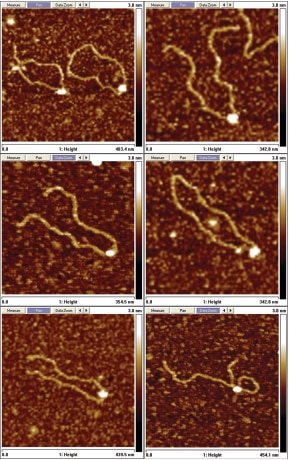 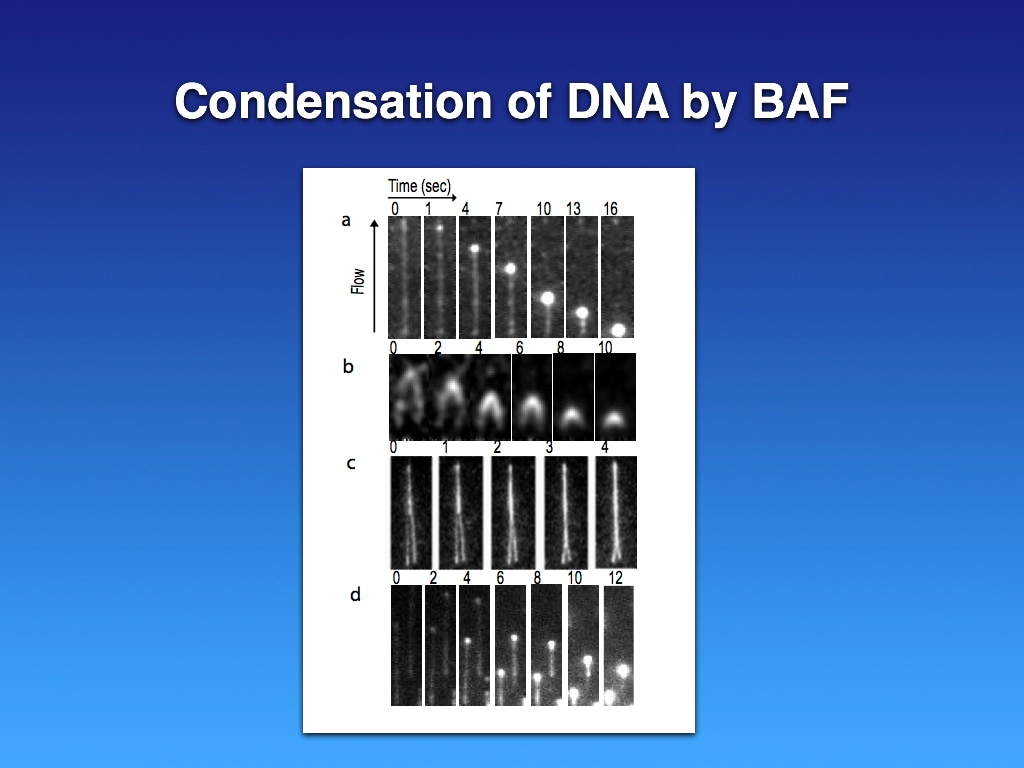 Condensation of DNA by barrier-to-autointegration factor (BAF)
Condensation of DNA by barrier-to-autointegration factor (BAF) is shown. Single DNA molecules are extended by buffer flow and visualized by fluorescence microscopy. At time zero BAF is introduced into the flow cell. The molecules compact into a ball as a result of DNA bridging by BAF. Depicted are (a) a molecule attached to surface at one end only, (b) a molecule attached at both ends, (C) two molecules attached side-by-side “zipper” together, and (d) other examples of molecules attached at one end. 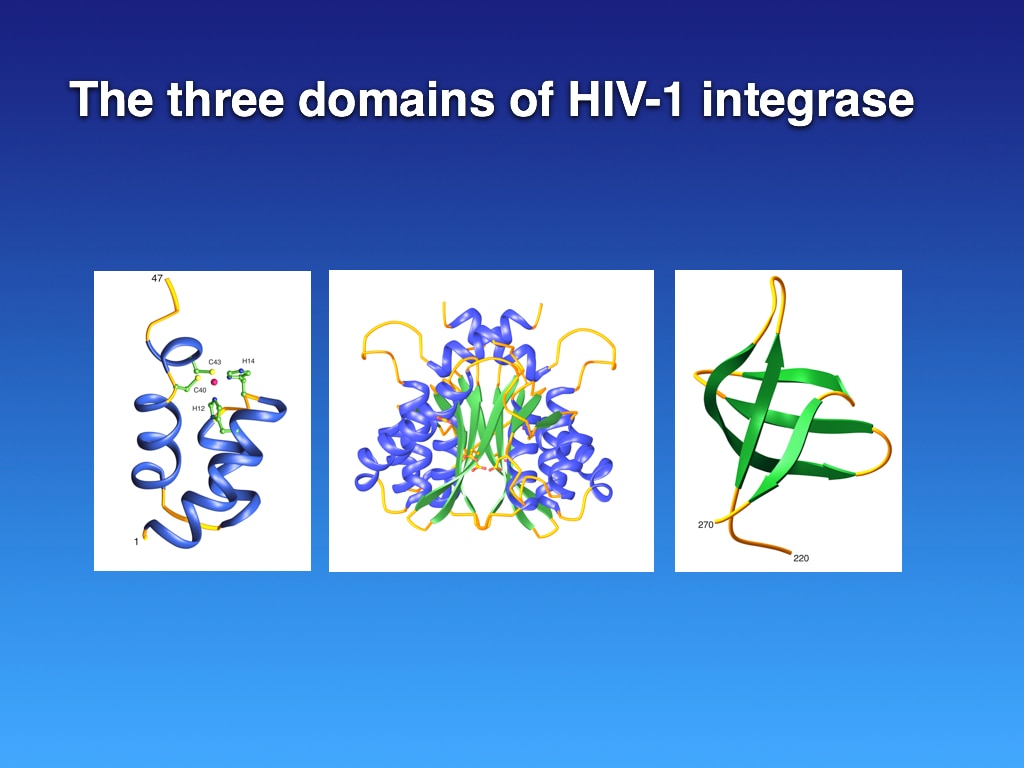 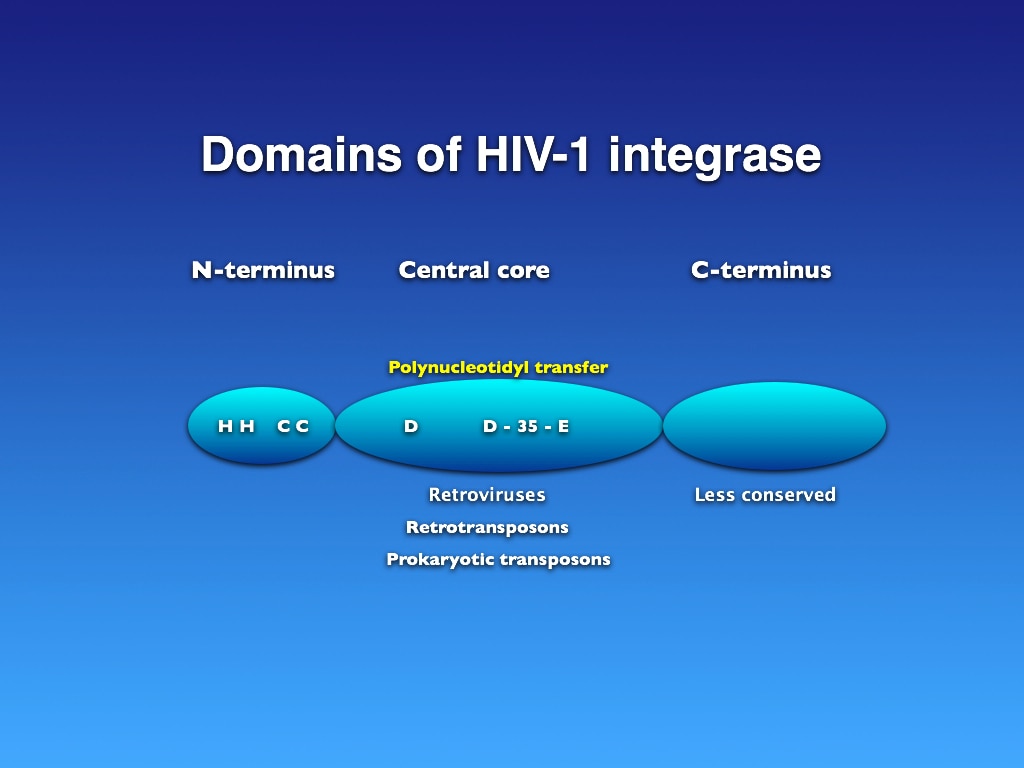