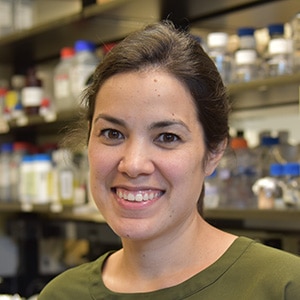 MicroRNAs (miRNAs) play an essential role in most physiological processes in animals and plants, including development, differentiation and behavior. However, both the role of miRNAs in embryogenesis and the temporal regulation of miRNAs via turnover are poorly understood. Our research group will define the biological functions of miRNAs in the embryo and the mechanisms of miRNA turnover. To address these questions, we will combine the strengths of classical C. elegans forward genetics with CRISPR-Cas-9-mediated genome editing, next-generation sequencing, cell biology, and biochemical techniques. Because embryonically-expressed miRNAs exhibit a sharp decrease in abundance at the end of embryogenesis, our efforts to simultaneously study the biology of these miRNAs and the mechanism of miRNA decay has the potential to uncover regulatory modules that couple miRNA decay to developmental timing.

MiRNAs are small noncoding RNAs that are loaded into Argonaute proteins to form the core of the miRNA-Induced Silencing Complex (miRISC). MiRNAs guide miRISC to complementary target mRNAs to silence their expression. Mutations in miRNA loci disrupt gene expression programs, and thus can contribute to the development of various diseases, including cancer. Consequently, understanding both the functions of miRNAs in normal development and the molecular mechanisms that regulate miRNAs are biological questions of critical importance.

Understanding the biological functions of miRNAs during embryogenesis

While the functions of miRNAs in differentiated tissues are well-studied in C. elegans and other organisms, the embryonic functions of only a few animal miRNAs are understood. Moreover, how miRNAs contribute to the largely post-transcriptional control of gene expression prior to the maternal-to-zygotic transition (MZT) is completely unknown. C. elegans is an excellent model organism in which to study embryonic development due to its well-defined stereotypic cell lineage and powerful genetic tools. Our group will use C. elegans to elucidate the functions of miRNAs in embryogenesis, first focusing on the miRNA families that are required for embryogenesis.

To dissect the biological pathways controlled by these miRNAs, our group will conduct forward (mutagenesis) and reverse (RNAi) screens for suppressors of microRNA family mutant phenotypes. Understanding the biological networks impacted by the embryonically-expressed microRNA families will yield important insights into how gene expression is controlled to coordinate embryogenesis.

Defining the molecular mechanisms of miRNA and Argonaute turnover

The balance of the rates of miRNA biogenesis and decay control miRNA abundance, and thus gene expression programs. Previous research has carefully elucidated mechanisms of miRNA biogenesis. However, we know very little about how miRNAs and miRISC are turned over – either constitutively or in a regulated manner. This is a major gap in our understanding of miRNA regulation, and thus the regulation of gene expression. We will use deep sequencing to assess the contribution of candidate players in microRNA turnover, as well as identify novel effectors and regulators of miRNA turnover.

A major unanswered question is whether the miRNA and its protein binding partner Argonaute are targeted for degradation together, or can instead be turned over separately. By measuring the effect of changes in miRNA turnover kinetics on Argonaute turnover kinetics, and vice versa, we will investigate how these events are interconnected. In the long term, we will thus establish a hierarchy of events in the process of miRISC turnover.

Understanding the regulation of miRNAs by turnover may lay the foundation for new modalities to treat human disease. This area of study could impact the treatment of cancer, since miRNAs are known to be globally downregulated in many cancer types, and miRNA biogenesis enzymes can act as haploinsufficient tumor suppressors. These data suggest that a modest increase in miRNA abundance could reverse the contribution of miRNAs to cancer. Thus, inhibition of miRNA turnover is an attractive therapeutic strategy. Since enzymes are likely to play a part in this process, small molecules inhibitors of miRNA turnover could be feasible as a targeted cancer therapy.

The basic principle of molecular biology is that a unit of DNA (a gene) is transcribed into a messenger RNA (mRNA), which is then translated into a functional protein (such as an enzyme, or a structural piece of the cell membrane). In the last two decades, many new layers of complexity have emerged to add to this picture. MicroRNAs are a recently-discovered class of molecule: tiny RNAs which antagonize the conversion of mRNAs to protein, a process known as "gene silencing." In normal cells, microRNAs are one critical layer in the careful control of protein levels. Therefore, not surprisingly, mutations which result in abnormally elevated or decreased amounts of microRNAs perturb the cellular processes regulated by mRNAs, and can lead to cancer. In fact, changes in microRNA levels have been observed in almost every type of cancer, including pancreatic, breast, lung, leukemia, sarcoma, lymphoma, ovarian, kidney, liver, prostate, and others. Moreover, perturbation of microRNA levels can play a role in every stage of disease, from initiation to invasion to metastasis.

Our work aims to elucidate the basic biology which controls microRNA levels. The amount of microRNA at a given time is a result of the balance of the rate at which microRNAs are made and the rate at which they are degraded. Although many studies have addressed how microRNAs are made, we understand very little about how they are degraded. We have designed multiple experiments which come from different angles to discover the factors that control microRNA degradation.

The very exciting news is that restoring normal microRNA levels has had astounding therapeutic effects on cancer in mice, and many research groups and companies are exploring related treatments in humans. One method of restoring normal microRNA levels is to directly deliver modified microRNAs to tumors; however, the pharmacology of these molecules is not ideal. We propose that microRNA degradation could be targeted as an alternative means to restoring microRNA levels. This is an attractive strategy because microRNAs are likely to be degraded by enzymes, which can be inhibited by traditional small-molecule drugs. Thus, learning about the mechanism of microRNA turnover will both deepen our understanding of cancer biology, as well as potentially open up a novel therapeutic avenue.