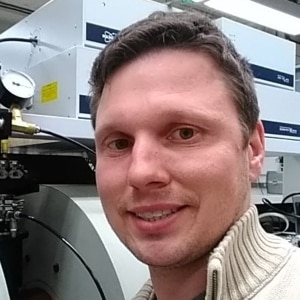 Dr. Schmidt’s contributions to the LCP have been significant, however that is negligible compared to the contribution to the field of biomolecular EPR. He has published an original publication on phase memory time, Tm, edited DEER methodology that allows for transverse relaxation aided distance assignment of pulsed DEER data by relying on a localized chemical environment-dependent relaxation of spin labels via amino acid specific protonation of methyl groups in an otherwise deuterated background (Chem. Commun. 56, 10890-10893). The implementation of this novel technique in conjunction with two-dimensional singular value decomposition analysis allowed for the differentiation and assignment of dipolar distances in proteins. This approach promises to be generally applicable to help address important challenges of DEER based distance measurements of protein complexes. This method is being fearlessly employed towards the application of protein kinetics, that is inaccessible to other techniques. Specifically, as the cell’s prototypical Ca2+ sensor, calmodulin is responsible for amplifying and adapting this universal signal into specific downstream signals via interactions with hundreds of other proteins. This biological adaptability correlates with the significant structural plasticity that has been observed in CaM. Dr. Schmidt has identified for the first time advanced folding kinetics that govern the interaction of Calmodulin and its substrates and hence provided the understanding of the biomolecular pathways that govern its interaction. Furthermore, Dr. Schmidt resiliently pursued and succeeded in the structural underlinings dictating the maturation pathway of HIV reverse transcriptase and hence credited with establishing and advancing EPR studies of HIV reverse transcriptase maturation making him a leader in the field (ChemPhysChem 17, 2987-2991; Biochemistry 55, 489-493; Proc. Natl. Acad. Sci. U. S. A. 116, 17809-17816 ChemBioChem. 21, 3051-3055). HIV reverse transcriptase maturation presents a pivotal point in the HIV replication cycle; immature, uncleaved reverse transcriptase will not permit the translation of viral RNA to DNA and subsequent incorporation into the host genome. Dr. Schmidt presented the structural underpinnings that permit the conversion of inactive HIV reverse transcriptase homodimer to its active heterodimer form through an array of publications. Most importantly, the findings conclude that the same drugs targeting the active heterodimer can also target the homodimer, hence alluding to a new HIV drug target and the great potential the known drugs have towards it. The importance of his findings and credits gave rise to a large number of presentations during international meetings, fellowships and international awards (John Weil award).

A large quantity of projects at the LCP is targeting biomolecular complexes that regulate diseases such as cancer, HIV, Huntington, Alzheimer's and Parkinson disease and hence deliberating the nation from those pandemics forms a central part in the LCP mission. To understand the molecular underlyings, such as protein aggregation or enzymatic activity, we employ an arsenal of biophysical methods to investigate the structure to function relationship regulating the onset of the disease (as described previously). EPR forms an integral part in this mission due to its unique properties; it is well matched to elucidate protein conformational arrangements and sheds light folding kinetics during protein binding events. To date we have invested close to $2 million in the Q-band EPR spectrometer whose main use is to obtain long-range distance information from double electron-electron resonance (DEER) measurements. Such pairwise distance between spin labels affords structural information on numerous complex systems of any molecular weight and size that can be difficult or impossible to obtain by any other method. This is especially useful for systems that can adopt different conformations. However, Q-band DEER EPR spectroscopy, like NMR, is far from trivial or routine, requires special expertise and involves very complex instrumentation and experimentation, Further, numerous developments are ongoing to increase the applicability of this structural method, including the observation of freeze-trapped transient species on the submillisecond time scale. Detained observations are interpreted in conjunction with other biophysical methods, such as NMR and MD simulation, to bridge the gap of knowledge in disease pathways.