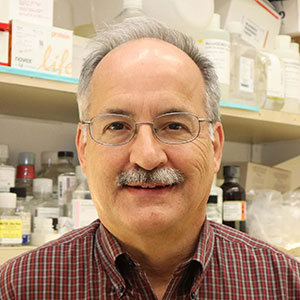 There are two principal areas of research in my laboratory. The first concentrates on the G protein β5 complex with regulator of G protein signaling (RGS) proteins. G protein β5 is a neuronally expressed, structurally divergent G protein β isoform, which may be functionally specialized. In general, RGS proteins act as GTPase activating proteins targeting Gα subunits and thus can help turn off G protein signalling; recent evidence suggests, however, that certain RGS proteins can also function as signal transducers or effectors in their own right.The observations that Gβ5 forms a tight complex with RGS proteins of the R7 subclass in the brain, and that such complexes are expressed in the cell nucleus and cytoplasm (in addition to the plasma membrane where the complex is anchored by binding to R7 binding protein, an acylated SNARE-like protein), are unexplained by current models of G protein signalling. Mice missing both copies of Gnb5 (the gene that encodes Gβ5) have severe developmental delay, and humans missing both copies of GNB5 have intellectual impairment, speech and language delay, cognitive disability, and cardiac arrhythmia (see link here).  We are seeking to better understand the function of the Gβ5/ R7-RGS/R7BP protein complex in the nervous system.  Our current work focuses on human and mouse phenotypes associated with GNB5 heterozygosity (GNB5 +/-), and understanding phenotypes associated with conditional Gnb5 knockout in mice.

The other area of research aims to understand the pathogenesis and clinical spectrum of familial isolated hyperparathyroidism, parathyroid cancer, and the hyperparathyroidism-jaw tumor syndrome (HPT-JT). HPT-JT is a familial syndrome of HPT with autosomal dominant transmission and high but incomplete and variable penetrance. Some 20 percent of all affected by HPT-JT have parathyroid cancer, and nearly 20 percent of adult cases appear to be silent carriers.  The trait links to the CDC73/HRPT2 locus at 1q25-q31. CDC73/HRPT2 is a widely expressed, evolutionarily conserved gene encoding parafibromin, a predominantly nuclear protein of 531 amino acids. Parafibromin is a component of the evolutionarily conserved PAF1 transcriptional regulatory complex. CDC73/HRPT2 is a tumor-suppressor gene, the inactivation of which is directly involved in predisposition to HPT-JT and parathyroid cancer. Current studies employ model systems and purified recombinant proteins to explore the key molecular mechanisms by which loss of parafibromin function promotes neoplasia.

This research may help in the diagnosis and therapy of benign and malignant parathyroid tumors, and perhaps other types of tumors. Better understanding of G protein-regulated signaling in brain and hormonal tissue may allow the identification of targets for therapeutic agents to selectively enhance or inhibit neuronal or hormonal signaling.

Further research is required to explore other tumors or malignancies that might be related to inactivation of the CDC73/HRPT2 gene.

Our research focuses on two areas:  (1) determining how a specialized complex of signaling proteins influences the activity of neurons (brain cells) and neuroendocrine cells (cells that release hormones), and (2) understanding diseases of parathyroid (glands in the neck that control the level of calcium in the blood).

We study a specialized group of signaling proteins that work together in a complex.  These include the G protein β5 complex with a regulator of G protein signaling (RGS) proteins, and a protein that anchors the complex to the membrane, R7BP.  These proteins are found in the plasma membranes and cytoplasm of brain cells and specialized brain cells that release hormones.  We are trying to understand how these protein complexes work, in order to potentially control signaling between and within cells and the cells’ subsequent responses.

We also study the disease processes and impact of parathyroid cancer and an inherited form of hyperparathyroidism, the hyperparathyroidism-jaw tumor syndrome (HPT-JT). HPT-JT runs in families, and ~20 percent of people affected by HPT-JT develop parathyroid cancer.  Approximately 20 percent of adult cases are carrying the gene without apparent effects.  Scientists know that this condition is linked to the CDC73/HRPT2 gene, which suppresses tumors and is located in an area of chromosome 1.  In parathyroid tumors from people with HPT-JT and in parathyroid cancer, this gene is frequently inactive. We use studies of mammalian and Drosophila model systems to explore the key molecular mechanisms and trace this biological pathway from gene to tumor growth.