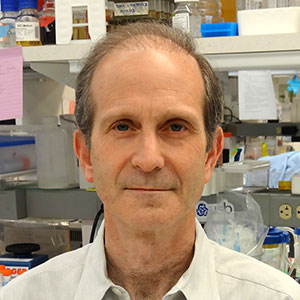 My laboratory has a long-standing interest in understanding how proteins are inserted into or transported across the cell membranes of both pathogenic and non-pathogenic bacteria.

In one project we are investigating the assembly (folding and membrane insertion) of proteins that reside in the outer membrane of Gram-negative bacteria. While most integral membrane proteins contain one or more α-helical membrane spanning segments, bacterial outer membrane proteins are anchored to the membrane by a single amphipathic β sheet that folds into a distinctive closed cylindrical structure called a “β barrel”. Previous studies have shown that a highly conserved and essential heterooligomer (the barrel assembly machinery or “Bam” complex) catalyzes the integration of β barrels into the outer membrane, but the mechanism by which it promotes insertion is unknown. Several lines of evidence indicate that the BamA subunit, an integral outer membrane protein that contains both a β barrel and several periplasmic domains that tether the other subunits, plays a central role in the insertion reaction. To gain further insight into outer membrane protein biogenesis, we recently developed a method to arrest the assembly of a native β barrel before it dissociates from the Bam complex and solved the structure of the purified Bam complex-substrate supercomplex by cryo-EM. The results showed that the BamA β barrel binds to the C-terminus of the substrate and then promotes its progressive conversion from an open β sheet to a barrel-like structure in a remarkable process that is influenced by membrane tension. Although we have focused on the assembly of a specific class of outer membrane proteins produced by pathogenic bacteria called “autotransporters” that contain a large N-terminal extracellular domain that encodes a virulence function in addition to a C-terminal β barrel, we are interested in studying the assembly of other classes of outer membrane proteins using biochemical, genetic and structural methods.

In a second project we are studying protein secretion by the Bacteroides, a genus of experimentally tractable Gram-negative bacteria that are highly abundant in the human gut microbiome. Although recent studies have suggested that these organisms influence human health significantly, their biology remains poorly understood. We recently found that one member of the Bacteroides genus, B. fragilis, utilizes a very different range of secretion strategies than well characterized Gram-negative bacteria such as E. coli. B. fragilis lacks several of the secretion pathways found in E. coli, and unlike E. coli transports a large number of lipoproteins to the cell surface. We also found that B. fragilis secretes a variety of unique proteins of unknown function. Presumably many of these proteins play important roles in colonization, persistence or communication with other microorganisms. By studying protein secretion in the Bacteroides we hope to gain insight into the remarkable ability of these organisms to thrive in a complex and potentially hostile environment.

Both natural and synthetic compounds that exhibit strong antimicrobial activity have recently been described that inhibit the activity of the Bam complex and provide a “proof of concept” that this essential factor is a promising target for the development of a novel class of antibiotics that could help to combat the rise of multidrug-resistant Gram-negative “superbugs”. Our studies may lead to strategies to isolate additional Bam complex inhibitors and to optimize the lead compounds that have already been isolated. Furthermore, our work on autotransporters may accelerate the development of vaccines against specific bacterial pathogens. Autotransporters are excellent vaccine candidates because they contain a large extracellular domain, and one autotransporter (pertactin) is already in use in pertussis vaccines. Our studies on autotransporters may also lead to improvements in “autodisplay” technology, a method in which autotransporters are used for the cell surface presentation of heterologous peptides or proteins. Autodisplay has proven to be a valuable alternative to phage-display technology and may ultimately be useful as a method to present antigens to induce immune protection. Finally, our work on Bacteroides may facilitate the construction of genetically engineered strains that secrete beneficial proteins into the colon and that can be used to treat illnesses such as inflammatory bowel disease.

Living cells can be thought of as extremely sophisticated machines that only function if all of the parts are in the right place. Imagine a car in which the steering wheel is in the trunk and the wheels are on the roof. Such a vehicle wouldn’t be very useful!

Most biochemical reactions are performed by proteins, which are manufactured inside living cells. In addition to folding into a defined three-dimensional shape, many proteins must be transported across one or more membrane barriers or embedded in a membrane in order to reach the location where they perform their jobs. We are currently studying protein localization in Gram-negative bacteria, a large group of unicellular organisms (some of which cause disease) that are bounded by a double membrane. We are especially interested in understanding the process by which proteins that must be transported across the first or “inner” membrane and then inserted into the second or “outer” membrane are localized. It is now clear that a multi-protein complex called the “barrel assembly machinery” or Bam complex that is produced by all Gram-negative bacteria drives the insertion of proteins into the outer membrane. Bacteria cannot survive if the Bam complex is inactivated because it mediates a critical cellular process. Remarkably, several chemical compounds have recently been identified that kill bacteria by inactivating the Bam complex. We hope that by better understanding the function of the Bam complex we will be able to help optimize these compounds or identify additional compounds that will form a new class of potent antibiotics. Furthermore, in some of our experiments we study a specific group of outer membrane proteins called “autotransporters” that are produced by disease-causing bacteria and that are of particular interest because they can be used to generate vaccines. Autotransporters can also be modified to display other proteins on the surface of bacteria and consequently have many potential applications in diagnostics and biotechnology (e.g., bioremediation).

In a separate project we are trying to understand how bacteria that are benign, naturally occurring inhabitants of the human colon transport proteins into the environment. We hope that the knowledge we gain will ultimately enable us to produce modified bacteria that export specific proteins into the colon to fight illnesses such as inflammatory bowel disease. 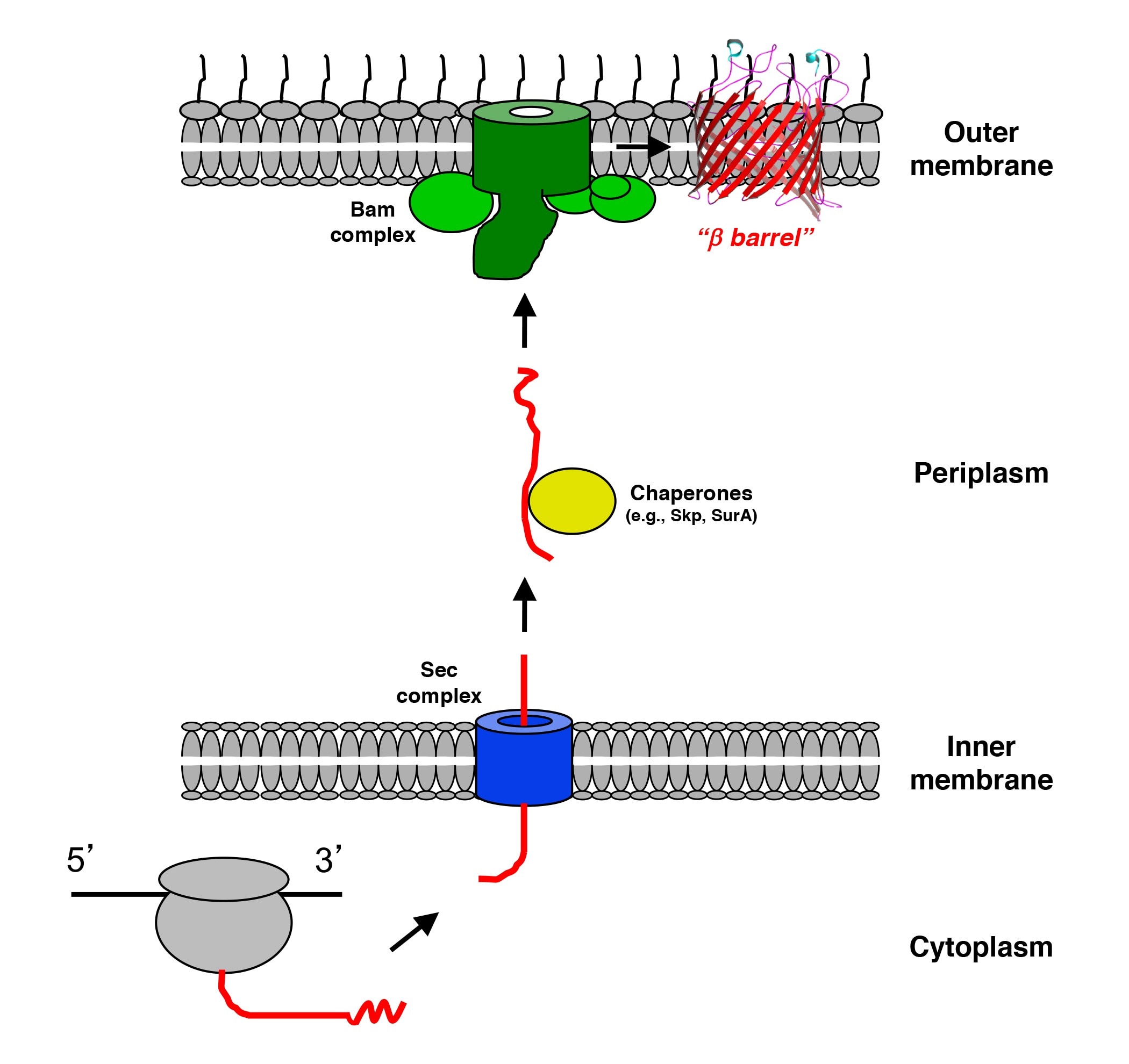 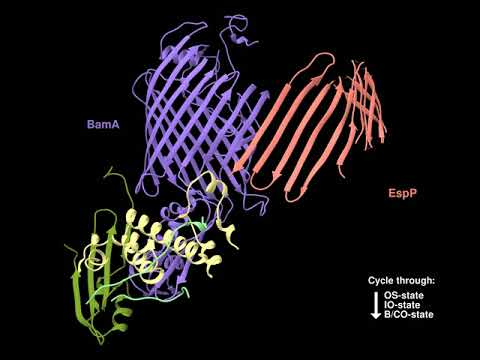 The Bam complex in action