A major goal of our research is to describe the intricate basic mechanisms of intracellular and extracellular macromolecular interactions in human cells and associated organisms. Understanding how normal functions are perturbed in disease conditions leads to the development of new therapies, thus, benefiting health and longevity.

One of our primary goals is to develop and apply a variety of genetic- and protein-based technologies to optimize proteins, protein-protein/protein-nucleic acid complexes and membrane protein/detergent complexes to enable their biophysical characterization and structure determination by solution nuclear magnetic resonance (NMR). Examples include complexes involved in signal transduction and transcriptional regulation, and viral proteins. Other applications for characterization include enzyme kinetics, calorimetry, advanced optical spectroscopy and immunochemistry to elucidate reaction mechanisms and protein-protein and protein-small molecule interactions.

By interacting closely with other groups within the Laboratory of Chemical Physics, we also develop approaches for surface immobilization, protein ligation, and site-specific multiple labeling of proteins and nucleic acids with probes to enable pioneering studies of folding and dynamics by single-molecule FRET spectroscopy and NMR. Additionally, we pursue long-term basic studies on specialized aspects of regulation of retroviral proteases, with the goal of developing new concepts for therapy.

Advances in retroviral therapy have enabled the long-term survival of HIV patients. However, error-prone replication of the viral genome results in high mutational frequency and the rapid selection of resistant mutants under drug pressure. We are investigating approaches that target initial events in retroviral protease maturation. The outcome of these studies may provide novel alternative strategies to circumvent drug resistance.

Additional studies are needed on thermodynamic characterization of antigen-antibody reactions in conjunction with mutagenesis of engineered single-chain antibodies to understand the molecular basis for viral neutralization. This knowledge may contribute to development of effective vaccines and/or immunotherapy for HIV and other viral infections.

We design, optimize, and develop methods to change proteins and nucleic acids to enable studies of the physical and structural properties that are essential for their function. We study the function of biological molecules, which participate in communication within and between cells, in gene expression and in regulating the replication and spread of viruses.

Terminal beta-sheet dimer interface of PR precursor analogue
The first crystal structures of a precursor mimetic (SFNFPR; four residues derived from the TFR are appended to its N-terminus) reveal several novel conformations, including disengagement of the four N-terminal residues (P1QIT4) from the β-sheet interface, accounting for its markedly lower dimer stability. 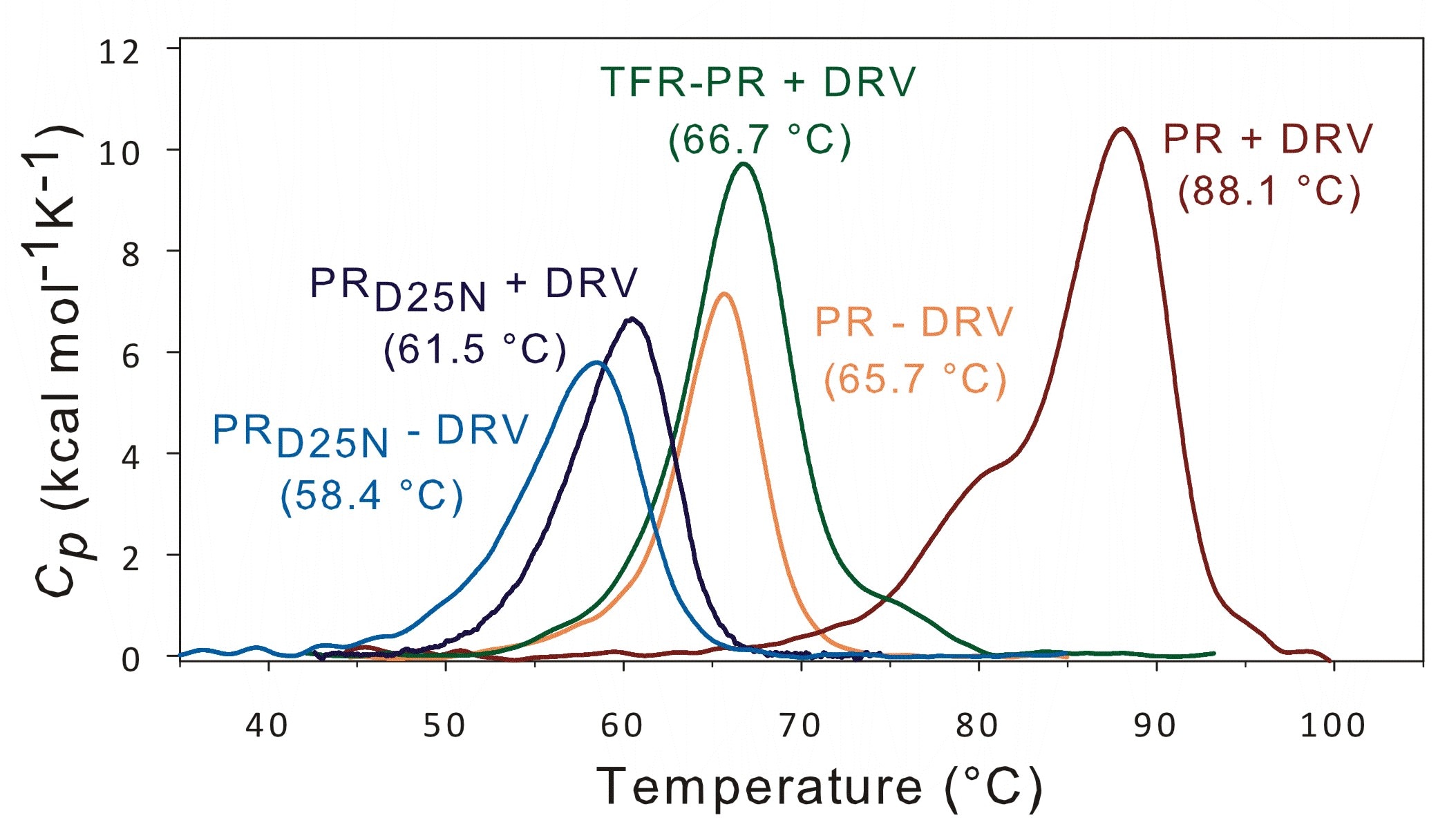 Monomer fold and hydrophilic inhibitor of active PR dimer
Each of the two identical 99-amino acid subunits of PR contributes one of the catalytic Asp25 residues. Interactions that hold the dimer together involve the active site (Asp25 residues shown) and flaps, and the β-sheet comprising the four N-terminal and four C-terminal residues of each monomer. Deletion of the C-terminal residues results in a stable but inactive PR monomer whose residues 10-90 adopt a fold similar to that of the dimer, as revealed by its NMR structure. Precursor with PR flanked by the TFR adopts a similar monomer fold. The N-terminal transframe octapeptide shown in surface representation (cleaved from the TFR at pH < 5; site 2 in figure 1) and its Glu-Asp-Leu sequence are competitive inhibitors of PR. Polar interactions with these residues enable a pH-dependent regulatory mechanism for PR maturation.