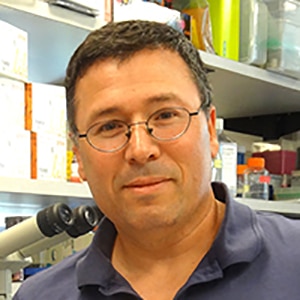 The ultimate goal of my lab is to understand the molecular mechanisms that are used to control the number and size of centrosomes. These tiny organelles play critical roles in cell growth, division, and motility but can only properly execute their various functions when present at one to two copies per cell and when they are of proper size.

Cell growth, division, and motility are highly dependent upon an organized and dynamic microtubule cytoskeleton. icrotubules are filamentous polymers with a defined polarity that can be arranged to form a variety of structures including bipolar spindles, radial arrays, and the axonems of cilia. Within the cell, the arrangement of microtubules is controlled by a variety of discreet microtubule-organizing centers (MTOCs), but in most cells, the dominant MTOC is the centrosome, a bipartite structure consisting of a central pair of barrel-shaped centrioles and a surrounding matrix of pericentriolar material (PCM). In the past several years it has become apparent that defects in centrosomes and centrioles are linked to, and even causative of, a growing number of human diseases including cancer, microcephaly, and dwarfism. While our understanding of centrosome biogenesis and function has advanced significantly in recent years, much still needs to be learned about how the number, size and activity of centrosomes are determined. To address such questions, my lab utilizes genetic and biochemical approaches to study centrosome biology in a simple model system, the small nematode worm, Caenorhabditis elegans.

The research in my lab is currently focused on two aspects of centrosome biology. First, we are particularly interested in the molecular mechanisms underlying the numerical control of centrioles. At birth, every cell inherits a single pair of centrioles from its parent. This pair is precisely duplicated in S phase to yield two centriole pairs (and thus two centrosomes). As each pole of the spindle is organized by a centrosome, defects in centriole duplication can disrupt spindle bipolarity and chromosome segregation, leading to genome instability. Second, we seek to understand how centrosome size and microtubule-organizing activity are controlled. The amount of PCM that surrounds a centriole pair can vary greatly between cell types and within a given cell from one cell cycle stage to the next. Since the nucleation and anchoring of microtubules is executed by the PCM, the microtubule-organizing capacity of centrosomes can be adjusted by controlling PCM levels. Work in a number of labs including my own, has indicated that assembly of the PCM is controlled by mechanisms intrinsic to the PCM, as well as extrinsic mechanisms.

During S phase, one round of centriole duplication proceeds whereby a single new (daughter) centriole is assembled next to and at a right angle to each preexisting (mother) centriole. Only a handful of core conserved centriole duplication factors have so far been identified. Among these is the master regulator known as polo-like kinase 4 (Plk-4) in humans and as ZYG-1 in C. elegans. This kinase is recruited to the mother centriole by its receptor, a coiled-coil protein known as SPD-2. At the mother centriole, Plk4/ZYG-1 recruits two components, SAS-5 and SAS-6, to form a central scaffold that imparts nine-fold symmetry upon the centriole cylinder. The final stage of centriole assembly involves the recruitment of yet another protein called SAS-4; this factor directs assembly of the outer centriole wall.

Using both genetic and biochemical screens we have identified novel factors that regulate centriole duplication and have studied these factors to gain insight into how the fidelity of centriole assembly is achieved. In particular, one factor we have recently discovered is protein phosphatase 1 (PP1). Loss of the PP1 catalytic subunit, or either of two regulatory subunits (I-2 and SDS-22) results in a centriole amplification phenotype whereby more than one daughter centriole is assembled next to each mother. Thus, PP1 plays an important role in the counting mechanism. In another study, we have identified a special allele of the sas-6 gene and have found that wild-type centrioles can direct the mutant protein to assemble into a functional daughter centriole but centrioles composed of the mutant protein cannot themselves direct assembly of the same mutant SAS-6 protein. This surprising finding suggests that the mother centriole plays an instructive role in daughter centriole assembly. My lab is also actively engaged in characterizing the physical interactions between core centriole duplication factors. We have purified full-length recombinant forms of most of the core duplication factors and are using biophysical and biochemical approaches to understand how they might interact to form a centriole.

PCM is a highly dynamic material and during the cell cycle, its levels change dramatically. At no time is this more striking than as the cell enters mitosis when centrosomes exhibit a rapid increase in the amount of PCM. This increase in PCM levels results in an increase in the microtubule-nucleating capacity of the centrosome, and is required for bipolar spindle assembly. In C. elegans, the PCM is largely composed of two proteins, SPD-2 and SPD-5 and recent studies indicate that the amount of SPD-2 is limiting for centrosome size. Our genetic screens have identified genes that control the size of the PCM. At least some of these appear to function within the PCM itself and define PCM-intrinsic regulatory mechanisms, while others appear to function at the centriole and define PCM-extrinsic mechanisms.

Several kinases have been identified that control PCM formation and likely participate in PCM-intrinsic regulatory pathways. These include PLK-1 and AIR-1 which localize to PCM and positively regulate PCM assembly. Both SPD-2 and SPD-5 appear to be targets of PLK-1 but it is not yet clear how phosphorylation of these proteins might drive their incorporation into PCM. In addition, my lab has recently discovered that PP1 negatively regulates recruitment of SPD-2 to the PCM. This role appears independent of PP1’s role in centriole duplication. Unlike PLK-1 and AIR-1 kinases, PP1 does not localize to the PCM and thus it is presently unclear if PP1’s role is intrinsic or extrinsic to the PCM or if PP1 directly antagonizes the activity of PLK-1 or AIR-1.

Mechanisms extrinsic to the PCM operate at the centriole to control the level of the surrounding PCM. Surprisingly we have found that centriole-localized ZYG-1 plays a role in controlling PCM levels. Specifically, we have found that if we experimentally increase the centriole-associated level of ZYG-1, that there is a corresponding increase in the amount of SPD-2 within the PCM. Further, such centrosomes possess a significantly elevated microtubule-nucleating capacity and are associated with a variety of defects in microtubule-dependent processes. Thus, centrosomes must maintain PCM levels within an acceptable range in order to function properly. Work in my lab is currently directed toward defining the molecular mechanisms that control the number and size of centrosomes and to understand how these processes go awry in disease.

A growing number of human disease have been linked to aberrations in the number and structure of centrosomes and centrioles. These include cancer, autosomal recessive primary microcephaly, primordial dwarfism, and a large number of so called ciliopathies such as polycystic kidney disease and Bardet-Biedl Syndrome. We aim to understand how the cell normally regulates the number and size of centrosomes and how defects in these regulatory processes lead to disease. By identifying genes involved in regulating centrosome structure and number and characterizing their various roles in these processes, we hope to identify molecular markers that can be used for diagnosis as well as potential therapeutic targets.

The centrosome is a specialized component of animal cells that participates in a variety of essential cellular processes. It does so through its ability to nucleate and organize microtubules, filamentous polymers that play a central role in the movement of cells and cellular constituents. Our lab wants to understand how cells control centrosome number and size as these parameters are critically important for proper cell growth, and division. To address these questions, we use the small nematode worm C. elegans as a simple animal model system. Most worm genes have human counterparts and thus our identification of genes that control centrosome number and size in the worm can inform us about analogous processes that operate in humans. During the last decade, it has become increasingly apparent that defects in centrosome number and size are associated with a variety of human diseases and thus a more complete understanding of how the centrosome is regulated will allow us to better understand how diseases arise as a result of centrosome dysfunction.