The Repeat Expansion Diseases are a large group of human genetic disorders that arise from an expansion in the size of a disease-specific tandem repeat tract or microsatellite. The mechanism of expansion is unknown. The consequences of expansion depend on a combination of sequence of the repeat, its location within the affected gene and the normal function of that gene. Most of the diseases in this group are severely life-limiting and have no effective treatment or cure. My group is particularly interested in those diseases where the repeat is located outside of the open reading frame and thus, where the consequences of expansion are not immediately apparent. We are interested in the molecular basis of the unusual mutation responsible for these disorders and in the downstream consequences of this mutation in this disease subset. By identifying the pathways involved in disease pathology, we hope to develop rational approaches to treating these disorders and other disorders like them.

My group focuses primarily on the FMR1-related disorders (aka the Fragile X–related disorders), Friedreich ataxia and Glutaminase Deficiency Disorder.  The FMR1-related disorders result from expansion of a CGG•CCG-repeat in the 5’ untranslated region (5’ UTR) of the X-linked FMR1 gene. Expansion has different consequences depending on the number of repeats in the expanded allele. Carriers of so-called premutation (PM) alleles, which have 55–200 repeats, are at risk of a neurodegenerative disorder known as Fragile X–associated tremor/ataxia syndrome (FXTAS). Female carriers are also at risk for Fragile X–associated primary ovarian insufficiency (FXPOI), a disorder involving infertility, menstrual abnormalities, and a risk of early menopause. Female carriers are also at risk of transmission of an FMR1 allele with >200 repeats to their offspring. Such alleles are known as full mutation (FM) alleles and in contrast to PM alleles, which are often hyperexpressed, FM alleles are epigenetically silenced. This results in Fragile X Syndrome (FXS), the most common heritable cause of intellectual disability. Expansion also results in the appearance of a folate-sensitive fragile site coincident with the expansion. Fragile sites are prone to breakage in vivo and often coincide with deletion or translocation breakpoints in a number of malignancies. In the case of this particular fragile site, fragility may be responsible for the elevated levels of Turner syndrome seen in females who inherit an FM allele. Friedreich ataxia is an early onset autosomal recessive disorder associated with loss of mobility and hypertrophic cardiomyopathy. It results from a GAA-repeat expansion in the first intron of the frataxin (FXN) gene. Expansion results in a deficiency of the frataxin protein, a protein involved in iron-sulfur cluster biogenesis. Glutaminase Deficiency Disorder is also an autosomal recessive early onset neurodegenerative disorder. It is associated with developmental delay, progressive ataxia and refractory seizures. A subset of patients with this disorder are either homozygous for a large CAG-repeat expansion in the 5’ UTR of the Glutaminase (GLS) gene or are heterozygous for the expansion and a deleterious point mutation in the GLS gene. Expansion results in reduced levels of glutaminase, the enzyme responsible for the conversion of glutamine to glutamate, the major brain excitatory neurotransmitter. This in turn results in a deficiency of glutamate and thus impaired brain function. In addition to their relevance to human health, these diseases provide a window into critical processes such as the preservation of genome stability, chromosome structure and epigenetics as well as events that are important for brain and ovarian function.

We are using a number of approaches to look at both the mechanisms of expansion and the consequences of expansion. Our approaches include in vitro biochemistry as well as the development of various stem cell and animal models for different aspects of these diseases. Our recent work has demonstrated that the expansion mutation results from the combined action of proteins normally involved in three different DNA repair pathways, base excision repair, mismatch repair and transcription coupled repair. These findings suggest possible drug targets for delaying the age of onset in those Repeat Expansion Diseases where somatic expansion contributes to the high early mortality. However, just how these DNA repair proteins that normally protect the genome against mutation, end up actually being mutagenic is unclear. Our current work is aimed at gaining a better understanding of the key steps in this process.

We are also trying to understand the processes responsible for the repeat-mediated epigenetic dysregulation that is seen in all of these disorders. Amongst our recent findings is the demonstration that the transcript of the FMR1 gene plays a key role in the FMR1 gene silencing that causes Fragile X syndrome. The transcript recruits the Polycomb Repressive Complex 2 (PRC2) to the FMR1 gene, likely via the formation of an RNA:DNA hybrid. Furthermore, we have shown that small molecules that interfere with recruitment of PRC2 or that inhibit the enzymatic activity of this complex can prevent gene silencing. Our data suggests that it may be possible to develop gene-specific treatments for the epigenetic abnormality responsible for FXS. We are also interested in developing better tools for diagnosis and research. To this end we have recently developed a package of robust, inexpensive and sensitive diagnostic assays for the FMR1-related disorders that are suitable for use both in the laboratory and clinic. We are also working with the Undiagnosed Diseases Program at the NIH to identify additional new Repeat Expansion Diseases and to develop assays suitable for diagnosing a variety of newly identified diseases in this group.

More than 35 human diseases stem from an unusual problem in DNA—specifically the presence of too many copies of a short DNA sequence in one important gene. Examples of such diseases includes Huntington Disease and some forms of ALS. The Usdin lab is interested in the mechanism responsible for the unusual mutation that causes these diseases as well as the consequences of this mutation in the FMR1-associated disorders (aka the Fragile X-related disorders), a group of diseases whose symptoms range from neurodegeneration and female infertility to intellectual disability and autism. We also study two additional Repeat Expansion Diseases that are associated with neurodegeneration, namely Friedreich ataxia and Glutaminase Deficiency Disorder, two early onset forms of progressive ataxia. We are interested in these diseases in part because they provide a window into critical processes affecting brain and ovarian function, and they affect these organs in ways that scientists do not fully understand yet. These diseases also provide a number of clinical challenges and currently lack effective treatments or cures. We hope that a better understanding of the underlying disease mechanism, coupled with better tools for diagnosis and research, will allow rational approaches to treatment to be developed. 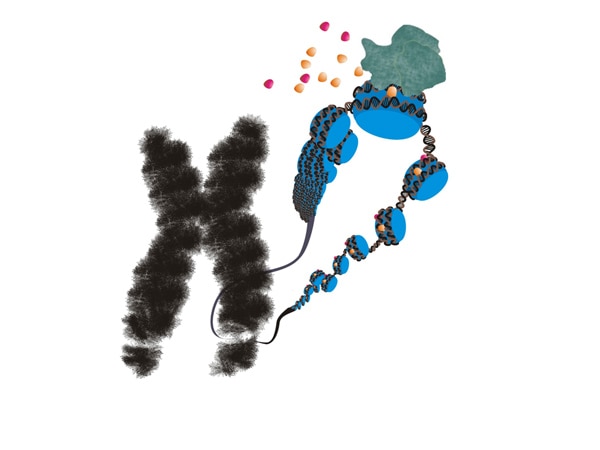 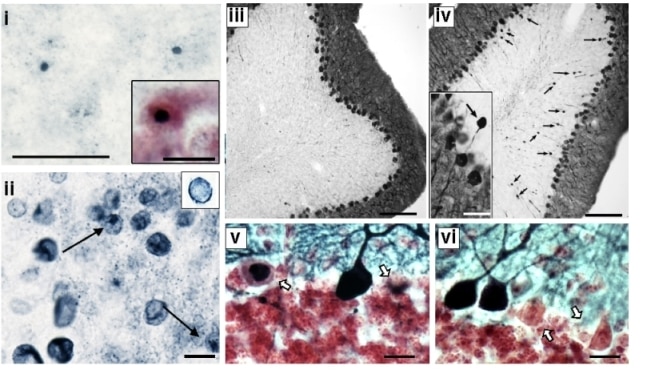 Chromosome fragility in FXS cells
In situ hybridization of metaphase chromosome spreads from a patient with Fragile X syndrome showing the chromosomes in blue and the region of the X chromosome containing the FMR1 gene in yellow.