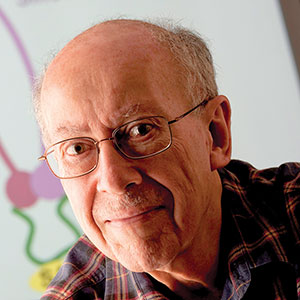 The goal is to understand how the chromatin proteins, including the histones and regulatory proteins, regulate the biochemical behavior of DNA within the nucleus, including the processes of cellular differentiation and embryonic development. Recent emphasis has been on the large scale organization of the genome and the role of regulatory proteins in genome organization.

Our group studies the relationship between chromatin structure and gene expression in eukaryotes. We are particularly interested in the mechanisms that establish boundaries between large-scale chromatin domains within the nucleus. Some boundary elements prevent the spread of condensed chromatin into transcriptionally active regions. Other kinds of elements serve to create ‘loop’ domains that either bring together distant DNA sequence elements or segregate them into separate loops. These play an important role in regulation of gene expression. We are studying both kinds of boundary elements. In each case, we have identified proteins that bind to boundary sites, as well as the co-factors recruited by those proteins, and obtained important information about how they function. We earlier investigated the action of one such protein, VEZF1/BGP1. We showed that this protein blocks the spread of DNA methylation, a silencing signal, and prevents the spread of an adjacent heterochromatic domain into a transcriptionally active region of the genome. We have shown an important property of this protein when bound to its site on DNA: it slows the passage of RNA polymerase II. One effect of this action is to alter the abundance of different RNA splice variants in the affected genes, an important regulatory function. We believe that the ability to impede the progress of the polymerase also serves as a boundary at other sites, preventing the encroachment of an adjacent heterochromatic domain.

An important focus of our research concerns long-range chromatin organization and the boundaries between independently regulated domains. Some years ago, we demonstrated that the protein CTCF is responsible for establishing an ‘insulator’ activity to block selectively interactions between enhancers and promoters. We also showed that CTCF plays such a role at the imprinted Igf2/H19 locus in vertebrates. We suggested that CTCF insulating activity might reflect an ability to establish loop domains within the nucleus. More recent work in many laboratories shows that this is the case. Generally, CTCF, with the help of the cohesin complex, helps organize the genome into such domains. One aspect of our recent studies has focused on identifying the co-factors that work with CTCF in domain organization. In one study, we have explored the role of CTCF in organization of pericentromeric chromatin, and shown that it recruits the centromeric protein CENP-E, raising the possibility that at these sites CTCF is involved in a novel type of long range chromatin organization. Present work is focused on the role of CTCF co-factors, and of other proteins related to CTCF, in large scale genome organization.

Our other main focus is the examination of long-range interactions within the nucleus in human pancreatic beta cells, between the insulin gene and other genes that may be coregulated. This is part of a larger effort to study chromatin structure of the insulin locus and its relationship to insulin gene expression and secretion. We have recently shown that the human insulin gene promoter makes physical contact in pancreatic islet cells with many distant sites on the same chromosome. Some of these contacts are to genes that are important in insulin secretion, and their expression is stimulated by the contacts, which increase when glucose is added to the islets. This is a complex physical regulatory network that may link insulin expression to secretion. We have now extended this approach to a human pancreatic beta cell line, which allows us to detect interactions between the insulin promoter and sites on other chromosomes. Many of these sites are witin Type1 or Type 2 diabetes susceptibility loci. This approach has identified many contacts that may reveal unknown regulatory pathways.

Many diseases, including cancer and diabetes, involve changes in the regulatory mechanisms that govern cell growth and biochemical function. These mechanisms all function at the level of chromatin. Understanding the changes in chromatin structure and function associated with both normal and abnormal growth and development is essential to making further progress.

Many diseases, including cancer and diabetes, involve changes in the regulatory mechanisms that govern cell growth and biochemical function. These mechanisms all opearate at the level of chromatin. Understanding the changes in chromatin structure and large scale genome organization associated with both normal and abnormal growth and development is essential to making further progress.

The study of epigenetic mechanisms, and particularly of the role of local and long range genome organization, are major areas that require further effort.

Our group studies the structure and biological properties of chromatin. Chromatin is the combination of DNA and the proteins that package it and regulate its function. Chromatin resides inside the nucleus of the cell. We study how different regions of chromatin can form protected neighborhoods called domains, and how adjacent neighborhoods with different properties can be prevented from influencing each other. For example, chromatin may contain genes that are ‘active’ next to a ‘silent’ region. Certain elements of the DNA sequence serve as boundaries between such regions, preventing the silent region from affecting the active one. We identified several proteins that bind to these elements, and showed that these proteins have properties that could explain how they form boundaries.

We also study long-range chromatin organization. One protein, CTCF, attaches to many sites throughout the organism’s DNA. Individual CTCF molecules recruit proteins that cause the CTCF sites to stick to one another, forming large loops of chromatin within the nucleus.Genes and regulatory elements in different loops tend to be ‘insulated’ from one another, helping to control gene expression. In other cases the CTCF interactions can help bring together two genes that are far apart on the DNA. We focus on long-range interactions between the insulin gene and other genes in human pancreatic beta cells.We want to understand how these chromatin structures relate to insulin gene expression and secretion of the hormone. Our recent results show that contacts over great distances are important in these processes.