We study early mammalian developmental biology using mice as an experimental system. In particular, we investigate molecular mechanisms of male and female gametogenesis with a focus on factors that promote production of mature gametes to ensure fertilization and pre-implantation embryogenesis.

Our investigations begin with the preparation of the sperm and egg in the testis and ovary, respectively, and include the molecular biology of gamete recognition that results in taxon-specific fertilization, the post-fertilization block to polyspermy, and the activation of the embryonic genome that ensures successful onset of mammalian development.

Our goals are to characterize the molecular basis of male and female gametogenesis with an emphasis on maternal proteins stored in mouse eggs that play major roles in successful fertilization, the subsequent block to polyspermy, and the transition from terminally differentiated, transcriptionally quiescent gametes to the totipotent cells of the early embryo as it passes through the female reproductive tract.

These investigations, conducted primarily in mice, have translational implications in human reproductive medicine by providing patients in their childbearing years with better reproductive choices. More broadly, better molecular understanding of the transition from terminally differentiated gametes to the totipotency of early embryonic cells may suggest strategies for reprograming somatic cells into pluripotent cells with therapeutic potential in a wide variety of human diseases. 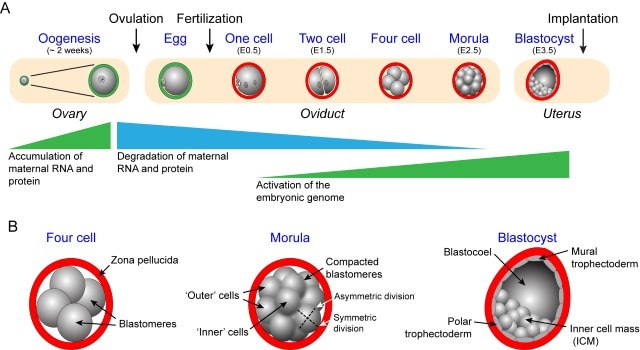 Early Mouse Development
Maternal RNA and proteins accumulate during oocyte growth. The zona pellucida that surrounds ovulated eggs (green) is modified following fertilization (red) to prevent polyspermy. Activation of the embryonic genome occurs in the 2-cell embryo and, following the third cell division, embryos compact to form morulae and then blastocysts that implant on the wall of the uterus. 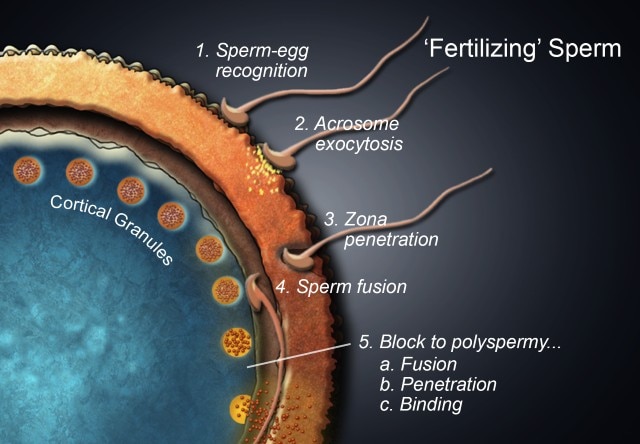 Mouse Fertilization
Fertilization occurs in the ampulla of the oviduct where the fertilizing sperm encounters an ovulated egg. After initial binding to the zona pellucida, the sperm penetrates through the zona matrix to fuse with the egg plasma membrane. The subsequent cortical granule reaction leads to a potent block to polyspermy.