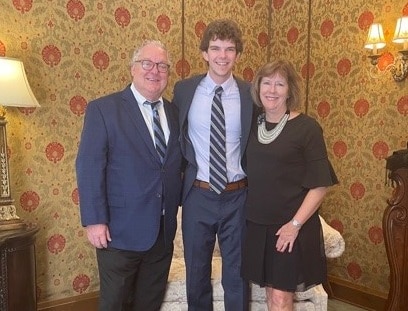 The picture of a healthy, busy 19-year-old, Ben engages in sports such as golf, waterskiing, and boating whenever he can, works summers as a farm technician picking and packing vegetables, and attends college full-time during the school year. Contrast that with his experience just 8 years earlier— of the debilitating stomach pain, nausea, diarrhea, weight loss, and other symptoms that accompanied his diagnosis of ulcerative colitis (UC). It has not been an easy journey, but Ben and his family have persevered and found meaning through participating in clinical research as part of the Predicting Response to Standardized Pediatric Colitis Therapy (PROTECT) study and also volunteering their time to help others with this condition.

Ben and his family—mother Jane, father Rex, and their family pet, a Westie dog named Gigi—are based in the Greater Cincinnati area. When Ben started feeling sick with stomach pain, nausea, and diarrhea at age 11, his mother immediately took him to see the pediatrician, who suspected a stomach bug. But after several days of no improvement in his symptoms, he was referred to the nearby campus of Cincinnati Children’s Hospital Medical Center (CCHMC), where he was treated for dehydration and nausea. Tests for intestinal parasites and bacterial infections came back negative, though gut tenderness signaled that inflammation was present. Ben was sent home with instructions to stay hydrated and continue taking medications to manage the nausea and pain. However, the next evening he experienced diarrhea with blood and mucus, as well as frequent vomiting. By the time they returned to their pediatrician’s office a few days later, Ben had lost 3 pounds over the course of 5 days, and the nausea and diarrhea still had not abated.

They were referred to Dr. Lee Denson, a gastroenterologist at CCHMC’s Inflammatory Bowel Disease (IBD) center, who suspected Ben might have UC and admitted him for diagnostic tests such as abdominal x-ray, colonoscopy, and endoscopy. Those tests showed that his stomach and intestines were irritated and inflamed. Ben was too young and ill at the time to remember all the details of his ordeal, but Jane recalls from her careful notes documenting the disease severity ratings that “he was one sick little boy.” He was diagnosed with severe UC and treated with intravenous corticosteroids.

“Although I was really young when I was diagnosed with UC and participated in the PROTECT study, I would recommend that others participate in research studies if they have the opportunity,” says Ben, who was a participant in the Predicting Response to Standardized Pediatric Colitis Therapy (PROTECT) study of ulcerative colitis (UC) treatment sponsored by the NIDDK.

At that time, the CCHMC staff informed Ben and his family about the opportunity to participate in the PROTECT study. Dr. Denson was the Principal Investigator of the CCHMC PROTECT study site—1 of the 29 participating PROTECT sites throughout North America. Dr. Denson and his staff relayed to the family the details of the study process, how to take the mesalamine treatment used in the study, and how to track Ben’s daily medications. The family decided to enroll Ben as a study participant, and the next day he was able to return home, where he continued taking the mesalamine study medication, as well as the steroid, anti-nausea, and antacid drugs to manage his symptoms. Ben had a difficult time swallowing some of the pills, so early on the family would mix the medication in with applesauce or yogurt, until a medical psychologist at CCHMC helped him learn to more easily swallow the pills. At follow-up appointments, the doctors found that his UC responded well to the mesalamine treatment, with continued gut healing, to the point that he was able to wean off the steroid after only 12 weeks—a primary goal of the study.

The family credits the staff at CCHMC who helped Ben return to good health for serving as a trusted resource and positive influence throughout this challenging time. Jane describes the PROTECT study staff as “helpful and so easy to work with … they were diligent and dedicated to the success of the study.” Ben also participated in several other clinical studies at CCHMC and would recommend the experience. “Although I was really young when I was diagnosed with UC and participated in the PROTECT study, I would recommend that others participate in research studies if they have the opportunity,” says Ben. “I feel that by participating, you are helping with research that could really benefit others in the future." Jane echoes this sentiment: “I always felt that participating in a study that might benefit other patients and families was very important…. Our hope is that other kids and parents or caregivers will benefit from the research that is being done.”

“Our hope is that other kids and parents or caregivers will benefit from the research that is being done,” says Jane, whose son Ben participated in a clinical research study of pediatric ulcerative colitis.

In addition to participating in clinical research, Ben and his family have taken other actions that pay forward the support they received. Ben has volunteered as part of walks sponsored by the Crohn’s and Colitis Foundation—the same patient advocacy organization that collaborates with the NIDDK on the PROTECT study and also hosts a summer camp for kids with IBD that he attended as a child. Jane has served on the board of the Foundation’s southwest Ohio chapter and volunteered with its walks and fundraisers. Through these events, they are working to ensure better days ahead for those diagnosed with UC and other forms of IBD.

These days, Ben’s overall health continues to be good, and his UC is considered to be in remission. The last few years of his schooling have been affected by the COVID-19 pandemic, with many cancelled senior year activities and events, and taking classes from his dorm room during his first year at college. But he is currently in his sophomore year at college studying finance. He continues to take the mesalamine medication and vitamins, and sees his doctor for routine colonoscopies to monitor his condition. The latest showed only mild intestinal inflammation. “We are very pleased with these results,” says Jane.