We are pursuing the development of solid-state nuclear magnetic resonance (NMR) methods for structural studies of biopolymers and the application of these methods to problems in biophysical chemistry and structural biology. Solid-state NMR methods provide structural information at atomic-level detail in systems that cannot be characterized by other structural methods, including x-ray diffraction, liquid-state NMR, and cryo-electron microscopy. Examples of such systems include proteins that associate with biological membranes, amyloid fibrils and other noncrystalline aggregates, and frozen solutions of large biomolecular assemblies. Our work is often exploratory and interdisciplinary, drawing heavily on experimental and theoretical techniques of the physical as well as biological sciences. We combine solid-state NMR measurements with electron microscopy, atomic force microscopy, and other complementary techniques.

Techniques developed in our group have been applied successfully in studies of HIV-related protein assemblies, amyloid fibrils associated with Alzheimer's disease, and other systems. Of particular interest recently are techniques for measuring interatomic distances and dihedral angles in uniformly 15N,13C-labeled proteins. We are also interested in techniques for sensitivity enhancement in solid-state NMR, including indirect detection methods, hyperpolarization methods, and low-temperature solid-state NMR technology, and in computational methods for data analysis.

Amyloid fibrils are of great interest in both the biomedical and the biophysical research communities, because of their association with diseases such as Alzheimer's disease and type 2 diabetes, and because amyloid fibrils are a common structural state of proteins and peptides that has been poorly understood. We have shown that solid-state NMR methods are uniquely capable of providing molecular-level structural constraints on amyloid fibrils, which are inherently noncrystalline and insoluble. We developed the first detailed, experimentally based molecular structural models for fibrils formed by the amyloid-beta peptide associated with Alzheimer's disease and by the amylin (or IAPP) peptide associated with type 2 diabetes. Current work is directed at structural characterization of amyloid fibrils that form in vivo in human tissue and at structural characterization of fibrils formed by proteins with low-complexity sequences.

Although the highly ordered, folded structures of thousands of proteins have been determined to be high resolution by x-ray crystallography and liquid-state NMR methods, relatively little is known about the structures and structural distributions of proteins in their unfolded states. The structural properties of unfolded and partially folded proteins are important as determinants of folding kinetics and thermodynamics, and as factors that affect protein aggregation in amyloid diseases. We are exploring the use of solid-state NMR in conjunction with rapid mixing, rapid freeze-quenching, and dynamic nuclear polarization as an approach to quantitative characterization of unfolded and partially folded proteins. Recent results show that we can determine site-specific conformational distributions in unfolded proteins and identify unanticipated kinetic intermediates in a rapid protein-folding process. The same technology can be used to study transient intermediates in ligand binding, amyloid aggregation, and protein self-assembly processes.

Previous work includes characterization of transmembrane oligomers formed by the HIV-1 Vpu protein, structural studies of HIV-1 Rev protein assemblies, and determination of bound peptide conformations in AIDS-related peptide/antibody complexes. We are currently exploring the application of solid-state NMR in studies of HIV-1 capsid protein assemblies, with the goals of identifying the intermolecular interactions that stabilize capsids and elucidating the mechanisms of capsid formation and maturation.

Applications of solid-state NMR to biological problems are frequently limited by low signal-to-noise ratios. To improve sensitivity, we have developed new technology for ultra-low-temperature (<30 K) biomolecular solid-state NMR. We are now combining this technology with dynamic nuclear polarization (DNP), a phenomenon in which high-frequency microwave irradiation of paramagnetically doped samples leads to large enhancements of nuclear spin polarizations, and hence, NMR signals. Recent results show that sensitivity enhancements greater than 400X (relative to conventional, room-temperature measurements) can be achieved with compact and relatively inexpensive microwave sources. Applications of DNP-enhanced, ultra-low-temperature, solid-state NMR in studies of amyloid precursors, protein-folding intermediates, and membrane proteins are in progress.

The spatial resolution of magnetic resonance imaging (MRI) is limited ultimately by the signal-to-noise of NMR signals from the individual volume elements in an image. Volume elements as small as 40 cubic microns are detectable at room temperature, using very small radio-frequency coils for signal excitation and detection, but MRI with 1 micron resolution (1 cubic micron volume elements) is essentially impossible. To overcome this barrier, we are exploring MRI at very low temperatures (<20 K), with additional sensitivity enhancements from dynamic nuclear polarization. Preliminary data indicate that sub-micron resolution may become feasible, eventually allowing MRI imaging of organelles within cells.

Detailed structural information at the molecular level is essential for the development of a correct understanding of interactions between biological macromolecules that are required for human health or that lead to human disease. Such information can guide the development of new drugs and new approaches to diagnosis, prevention, and treatment.

In the case of amyloid diseases such as Alzheimer's disease and type 2 diabetes, we need to identify and characterize the precise structural entities that develop in human tissue and investigate connections between structural variations and variations in disease development. 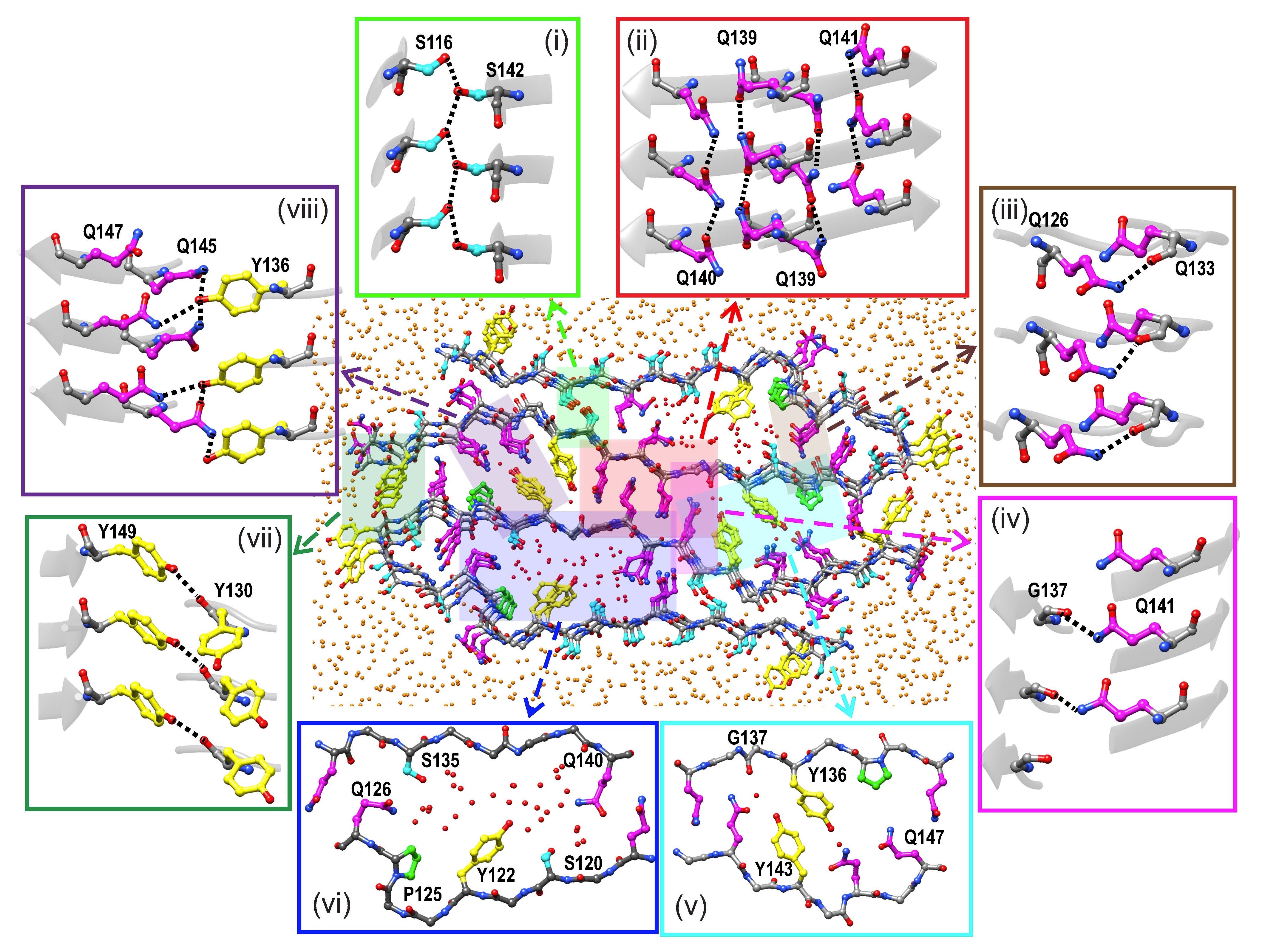 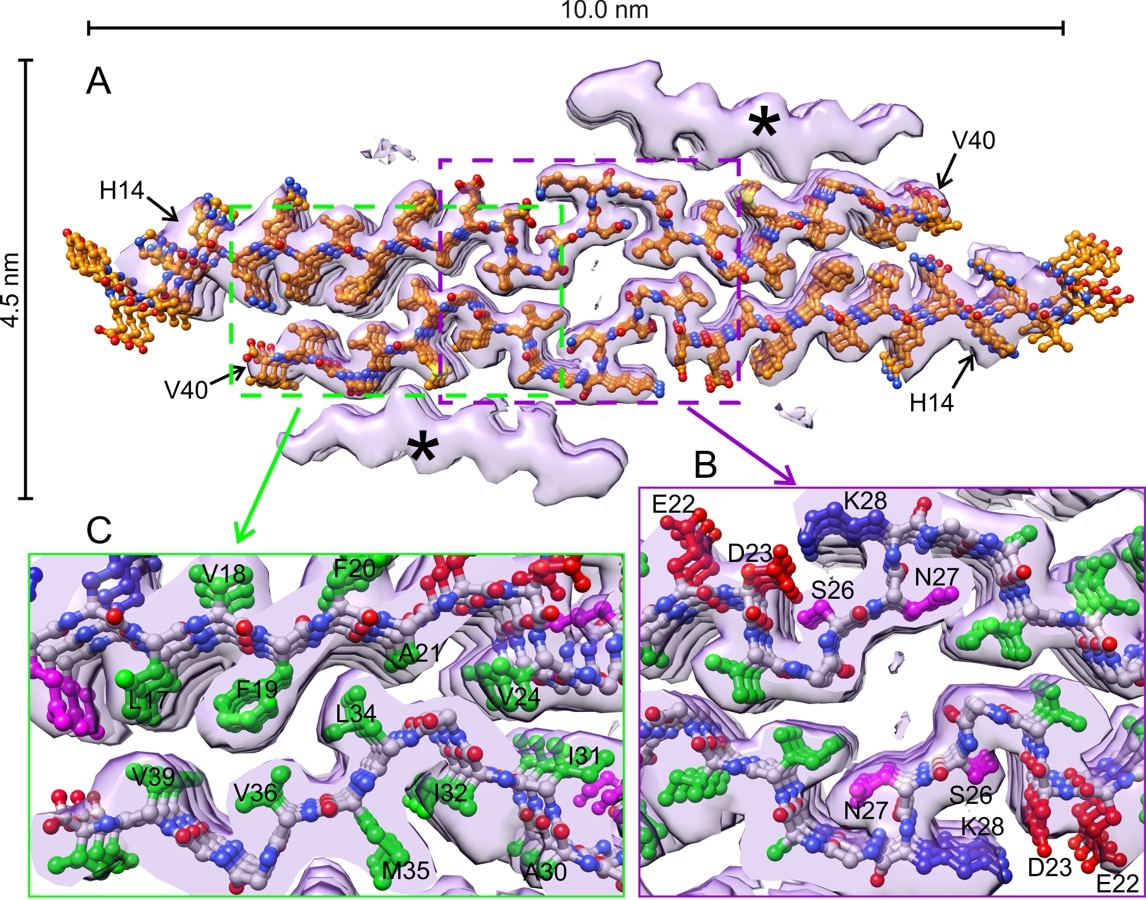 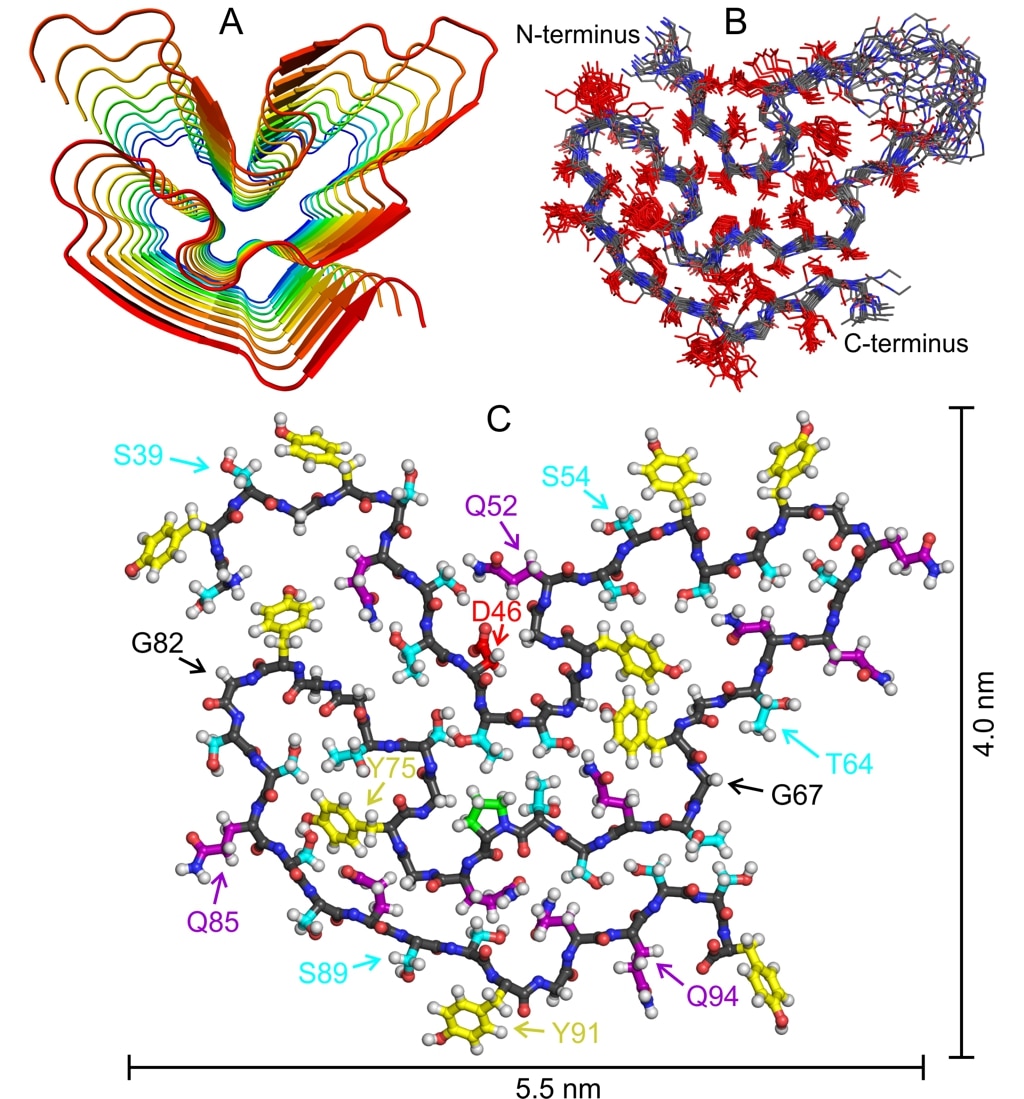 Molecular structure of amyloid-like fibrils formed by the low-complexity domain of the FUS protein, derived from solid state NMR data 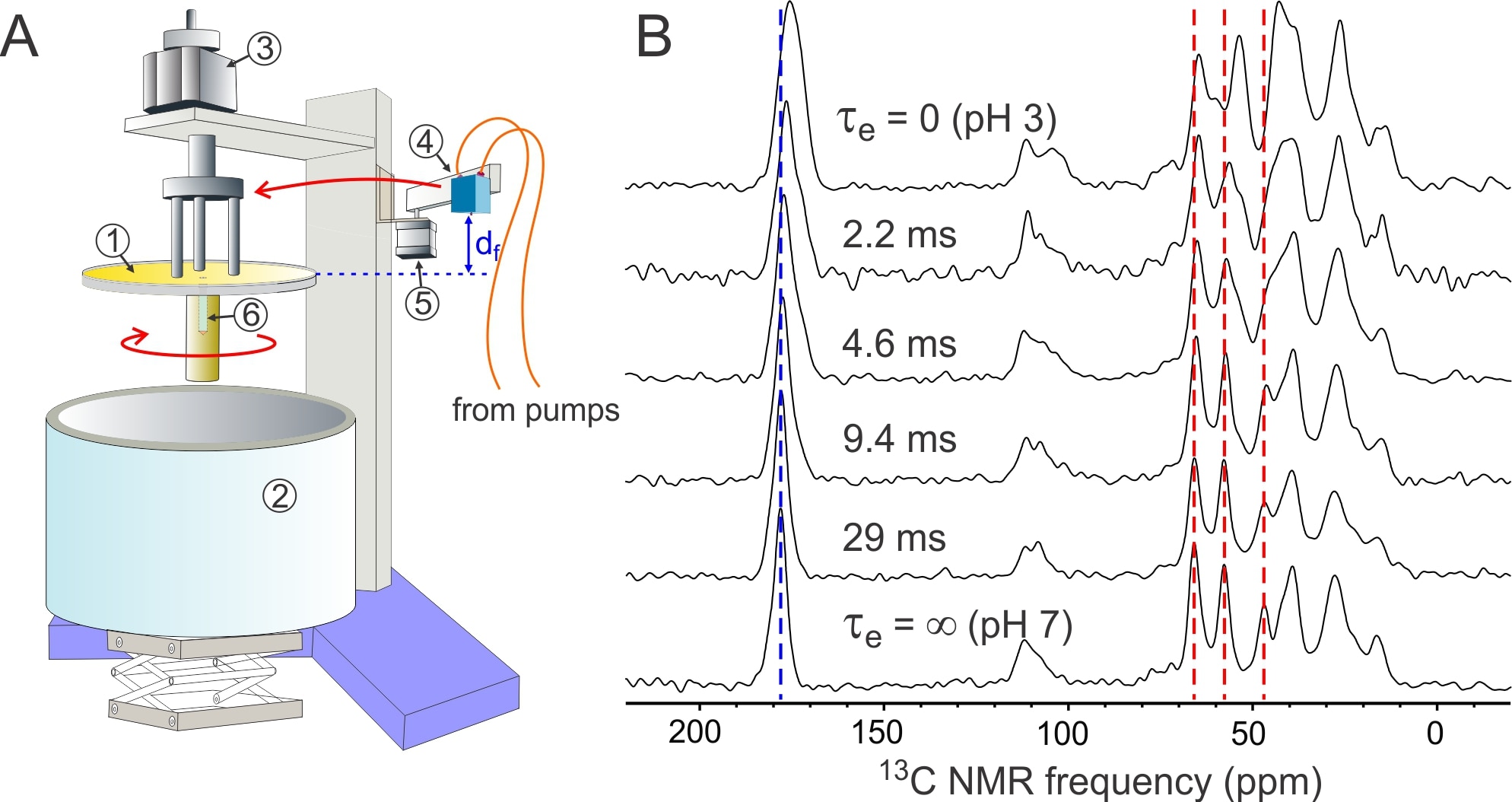 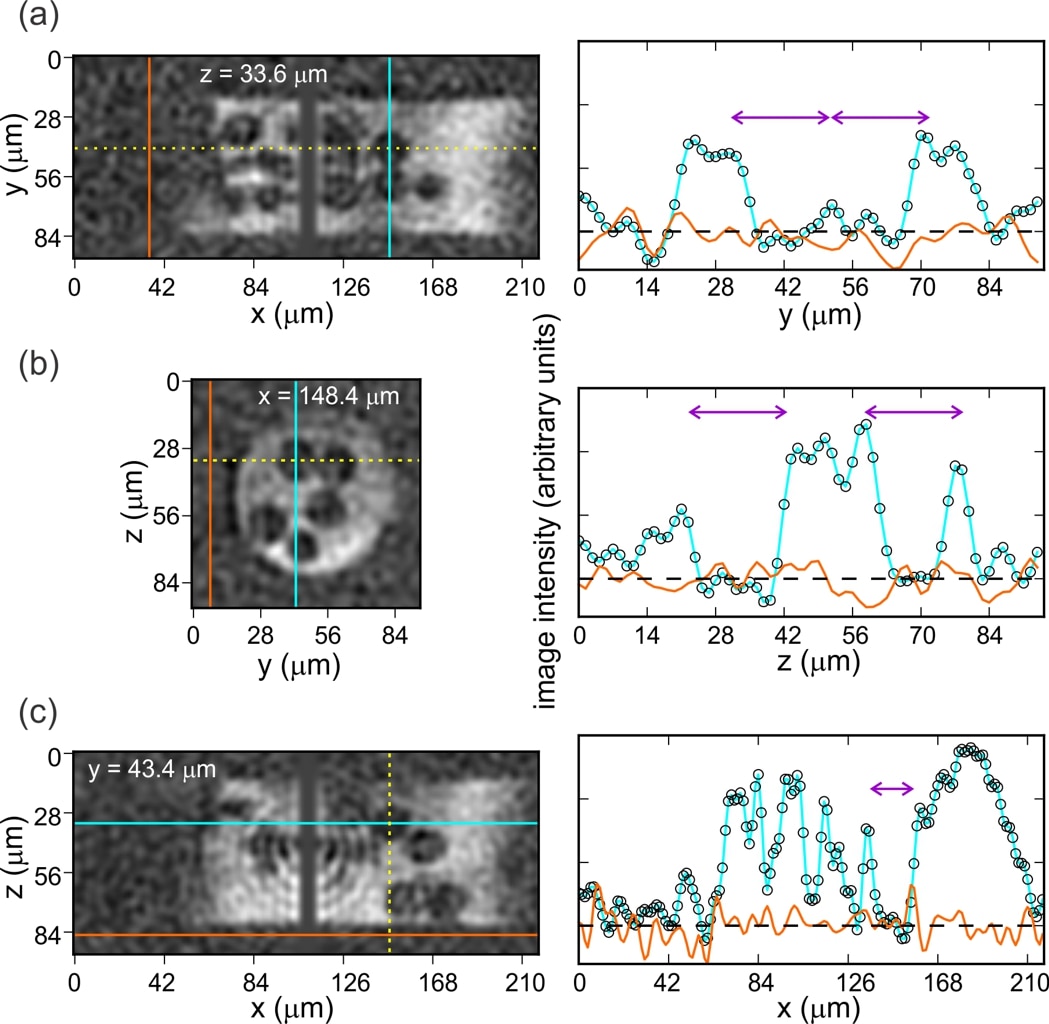 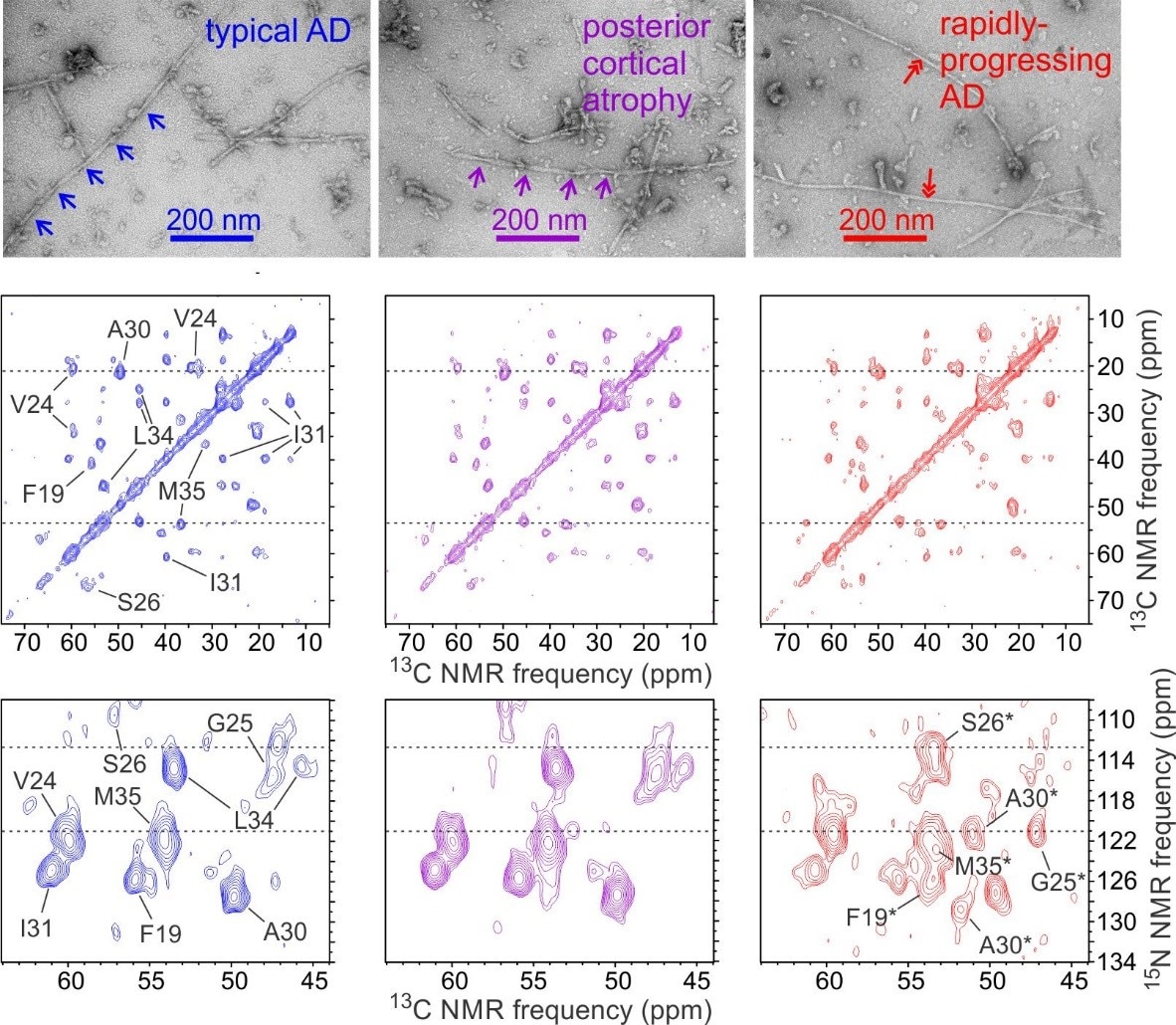 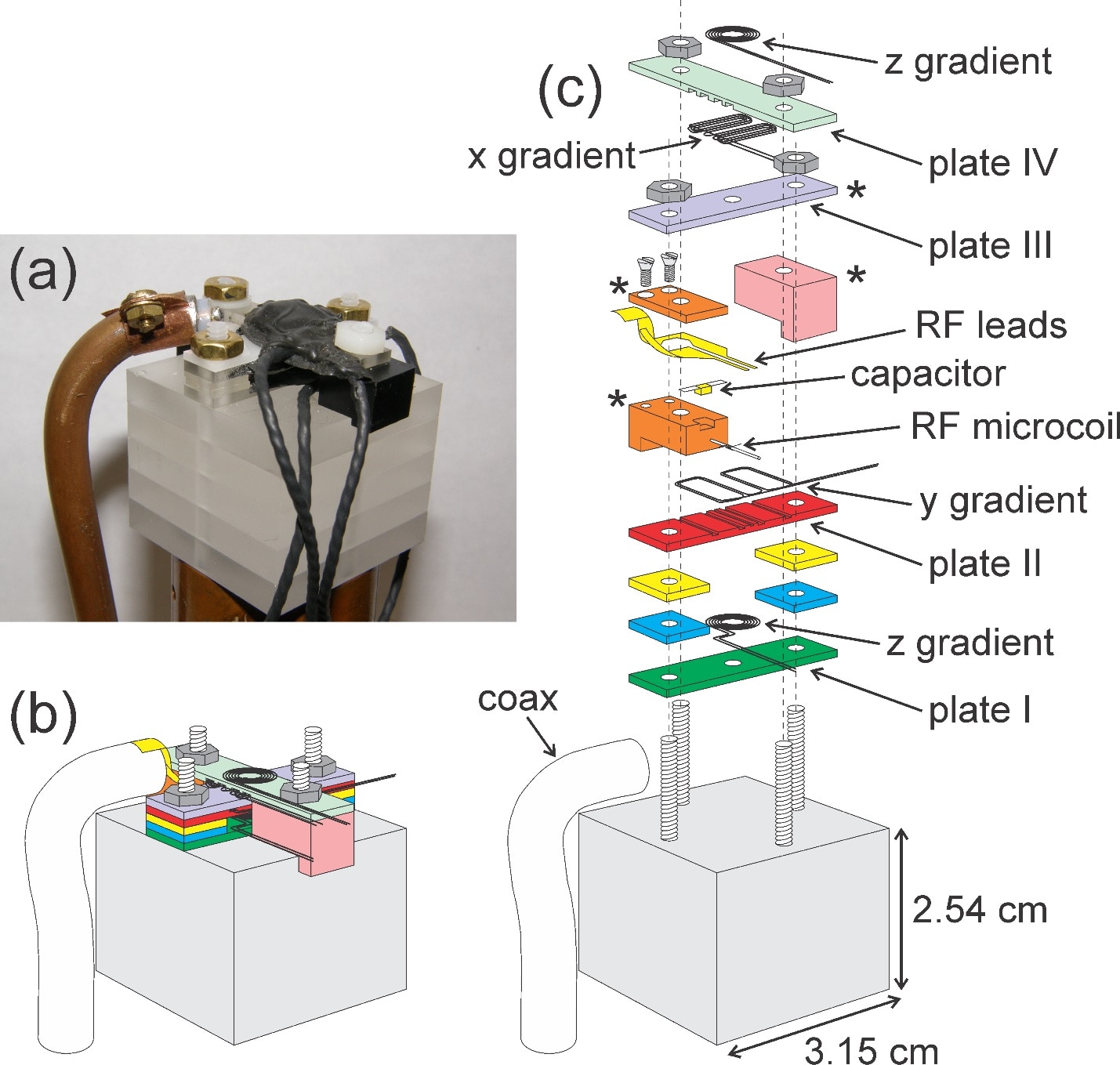 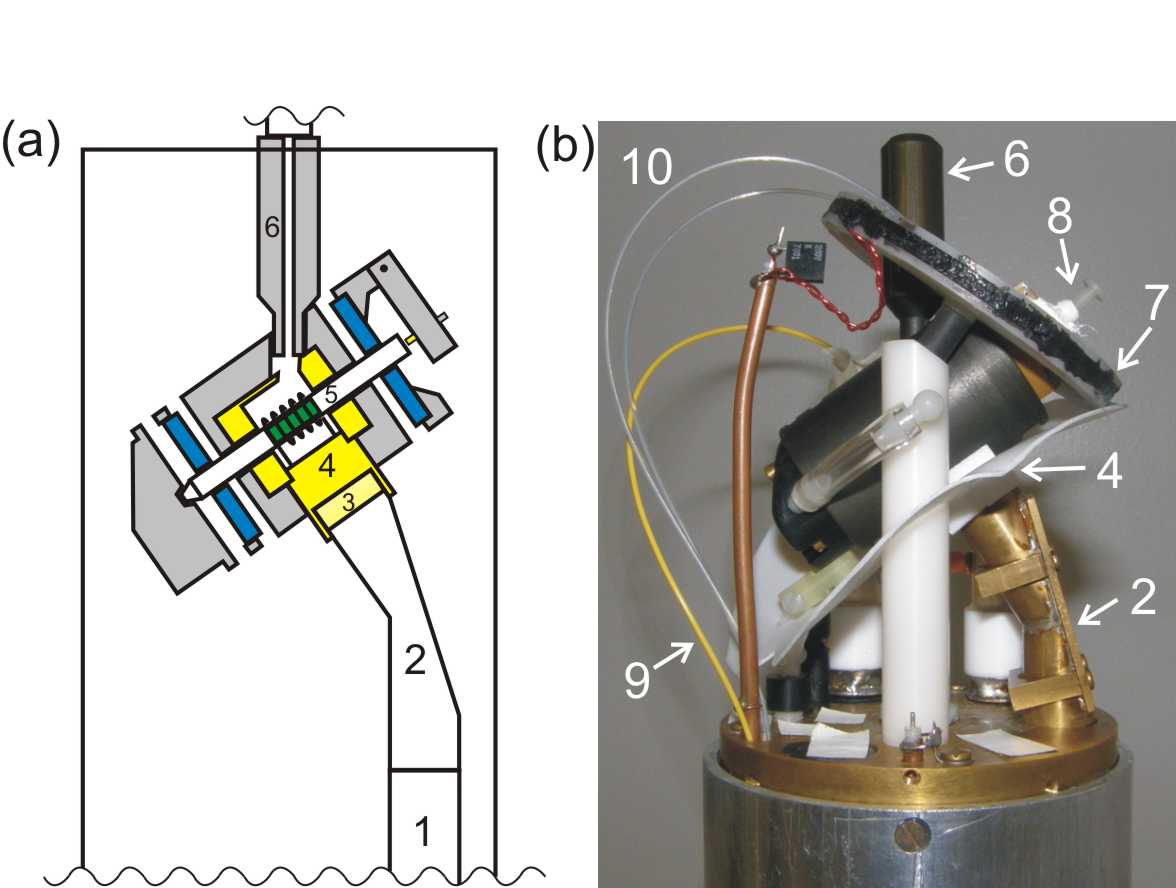 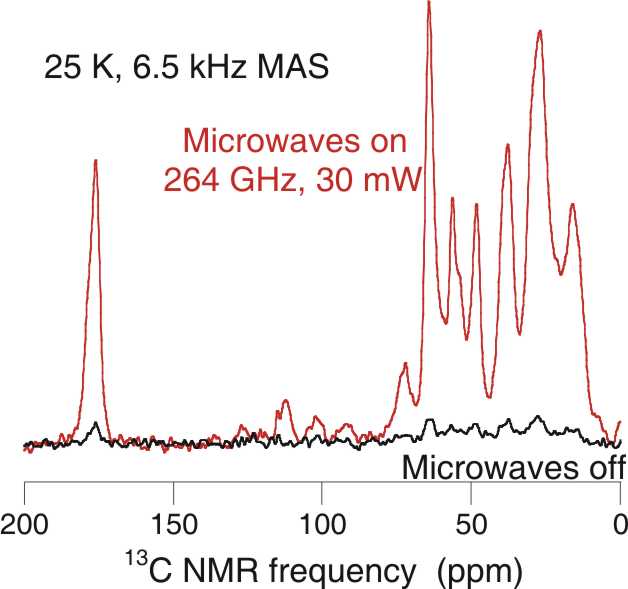