The brain may be wired to drive intake of high-fat foods, according to research by an international team of scientists, including 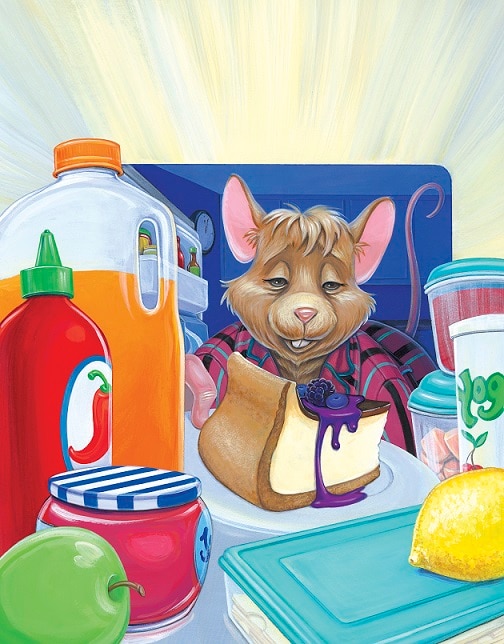 Credit: NIH Medical Arts from NIDDK’s Diabetes, Endocrinology, and Obesity Branch. The study found that, after exposure to high-fat, calorie-rich foods, mice no longer wanted a nutritionally balanced, standard diet, even when they were hungry and no longer had access to the high-fat foods. The high-fat diet was the only way to “switch off” the neurons responsible for the unpleasant sensations linked to hunger. The researchers also found that the neurons associated with the sense of reward that comes with food discovery showed significantly decreased responses to the nutritionally balanced foods once the mice were exposed to the high-fat foods.

Because the neurons the researchers studied in mice have nearly identical functions in people, the findings suggest a neural basis behind the challenges of human dieting. The paper, co-authored by scientists at NIH’s National Institute of Environmental Health Sciences and National Institute of Drug Abuse, published in August in Nature Neuroscience.

Study to recruit thousands of participants to reveal exercise impact at the molecular level: In the largest exercise research program of its kind, the NIH-funded Molecular Transducers of Physical Activity Consortium (MoTrPAC) will 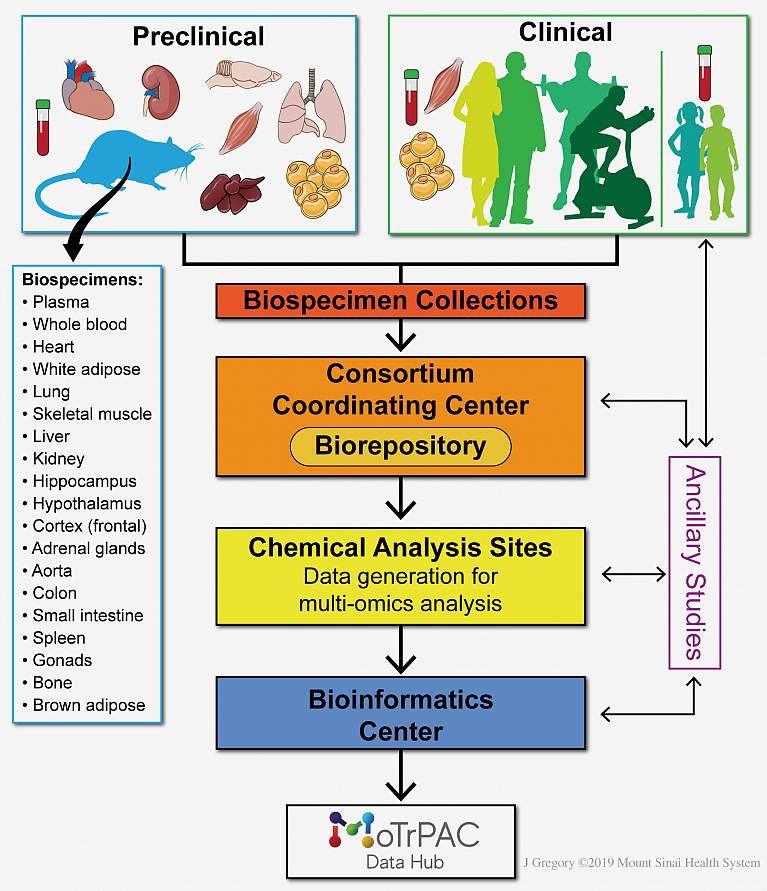 Credit: Jill K. Gregory, Mount Sinai Health System collect and analyze data from nearly 2,600 healthy adults and children to understand the body’s molecular changes before, during, and after exercise. The information about endurance and resistance exercise in a wide range of individuals and in different tissues may influence exercise guidelines, making them more tailored for specific groups of people. MoTrPAC researchers recently published a paper detailing their approach to this ambitious research project. MoTrPAC is funded by the NIH Common Fund and overseen in collaboration by NIDDK and other NIH institutes.


First-ever research network tackles diabetic foot complications: The NIH has funded six U.S. research institutions to launch the first-ever multicenter network to study diabetic foot ulcers, a common and burdensome complication of diabetes and the leading cause of lower limb amputations in the United States. The Diabetic Foot Consortium (DFC) aims to lay the 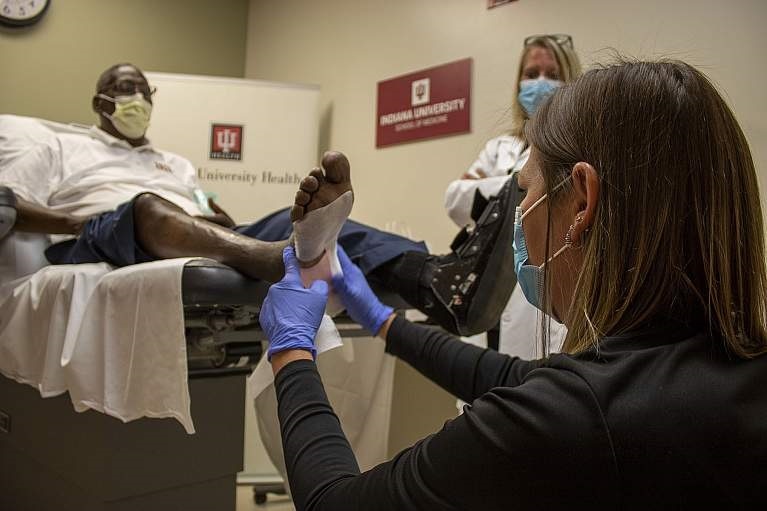 Credit: Marco Gutierrez, Indiana University School of Medicine foundation for a clinical trial network to test how to improve diabetic wound healing and prevent amputations among the 27 million American adults with diabetes. The first studies will focus on finding biological clues, called biomarkers, in people with diabetic foot ulcers that can guide treatment and predict how the ulcer will heal and the likelihood of an ulcer returning. In addition, the DFC will build a roadmap and framework for researchers to follow up interesting leads or pursue new studies.

Treatment for pain reduces tolerance and side effects of opioids when co-administered in rodents: Researchers from NIDDK’s Laboratory of Bioorganic Chemistry and collaborators invented a drug that prevents the development of unwanted side effects of morphine, an opioid, in rodents. When the drug, IB-

Credit: Daniela Salvemini, Saint Louis University.MECA, was administered with morphine, the researchers saw that it greatly reduced drug-dependent withdrawal behaviors that often occur with long-term opioid use. IB-MECA is already in clinical trials for inflammatory diseases and, if proven effective, could be a viable tool in the approach in treating chronic pain without creating dependency. This work published in May in the Journal of Pharmacology and Experimental Therapeutics

Researchers demonstrate a link between metabolism and DNA damage response in stem cells: A study done in NIDDK’s Laboratory of Cell and Molecular Biology found that an enzyme called O-GlcNAc Transferase induces the body’s cellular repairing mechanism, called the DNA damage response, to prevent DNA mutations and diseases originating from disruptions in stem cells. Results from the experiments using both fruit fly and mice stem cells suggest that O-GlcNAc is crucial for maintaining gut equilibrium, which is needed for a healthy metabolism. Results also showed that O-GlcNAc could be a critical regulator of the DNA damage response and play a role in the production and renewal of stem cells. This work has implications for a potential therapeutic pathway for stem-cell-derived diseases, such as cancer and diabetes. This work published in Cell Reports in May. 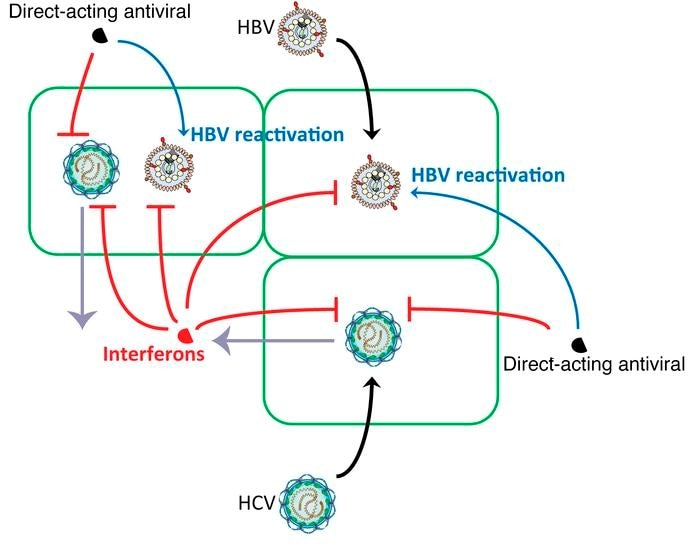 NIDDK researchers from the Liver Diseases Branch demonstrated - in vitro, in mice, and by studying blood samples of coinfected patients - that an HBV infection can flare due to the treatment of HCV by a class of drugs called direct-acting antivirals, leading to the potential for more severe hepatitis due to the HBV reactivation. Based on these findings and other work, the Food and Drug Administration has issued warnings regarding the risk of HBV reactivation in coinfected patients receiving direct-acting antiviral drugs. This study published in the Journal of Clinical Investigation in June.

Research group identifies potential targets for novel antidiabetic drugs: Dr. Jurgen Wess and his team in the Laboratory of Bioorganic Chemistry recently published three papers on mechanisms related to type 2 diabetes and suggestions for promising new treatments. In the first study, which published in 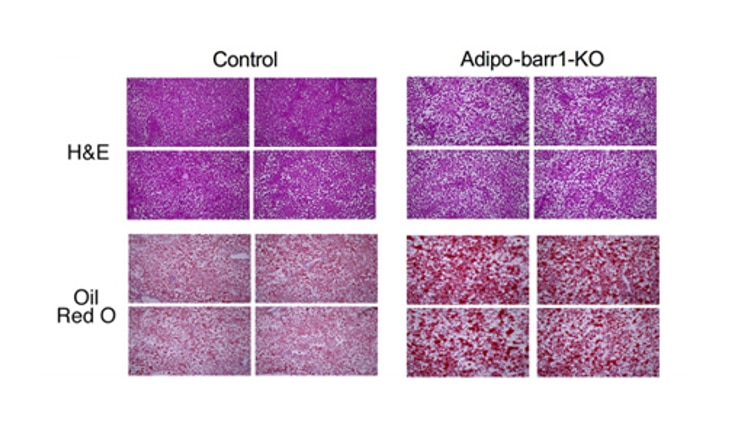 Science Advances in June, Wess’s group found that a signaling protein called beta-arrestin-1 (barr1) plays an important role in regulating metabolic functions, such as breaking down food and transforming digested food into energy that the body can use. The research shows that drugs able to enhance the activity of barr1 in certain nerve cells could be an effective treatment for diabetes.

In the second study, also published in Science Advances, the group used mice to show that brown adipose tissue (brown fat), which converts energy from food into heat, could be an important target for antidiabetic drugs. Researchers concluded that drugs able to enhance the levels of barr1 in brown fat may prove useful for the treatment of type 2 diabetes and related metabolic disorders.

In the third study, Wess and colleagues focused on the protein Gi, essential for maintaining normal blood glucose concentrations by regulating the activity of fat cells. The group showed that drugs able to activate Gi signaling in fat cells reduced elevated blood glucose levels and stimulated insulin signaling in mice. This approach could be beneficial for managing blood glucose in people with type 2 diabetes. This research was published in Nature Communications in June.

NIH scientists develop blood test to help improve liver cancer screening: NIDDK researchers in the Liver Diseases Branch collaborated with scientists at the National Cancer Institute to design a new screening test to identify people who are likely to 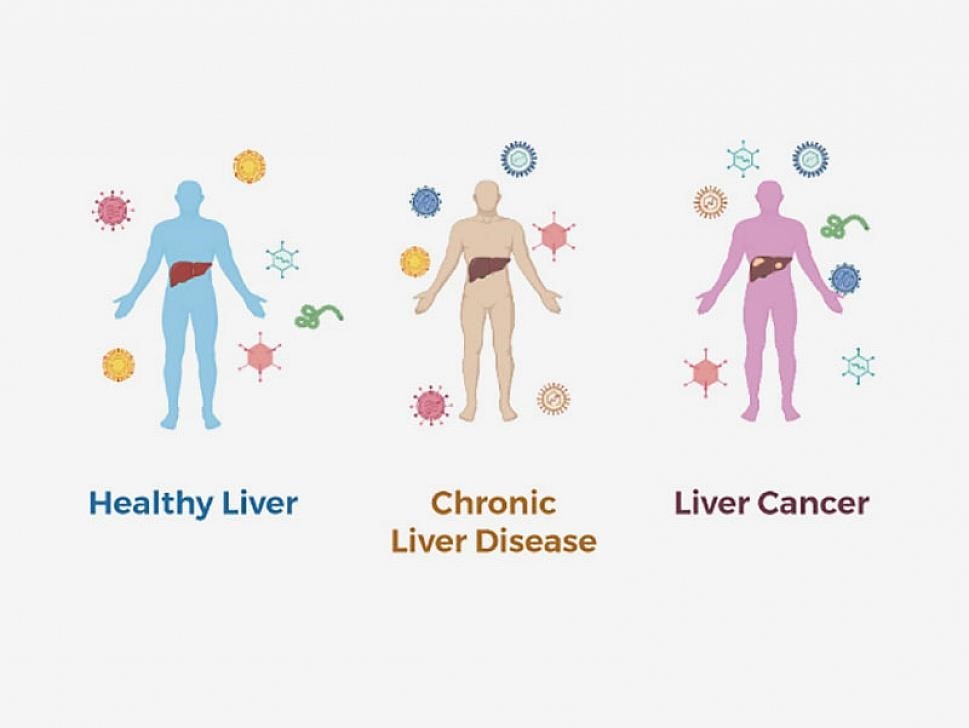 Credit: Jinping Liu, Ph.D., University of Pennsylvania. develop hepatocellular carcinoma (HCC), the most common form of liver cancer. The investigators developed a simple blood test that checks for the patient’s previous exposure to certain viruses, including hepatitis B or hepatitis C virus, which are risk factors for developing HCC. The researchers checked for the viral “footprints” of more than 1,000 different viruses left behind after exposure in participant blood samples. They identified a specific viral exposure signature that could accurately distinguish people with HCC from people with chronic liver disease and healthy volunteers. This signature contained footprints from 61 different viruses. Researchers are continuing to study the approach and plan to test it in additional studies. This study was published in Cell in June. 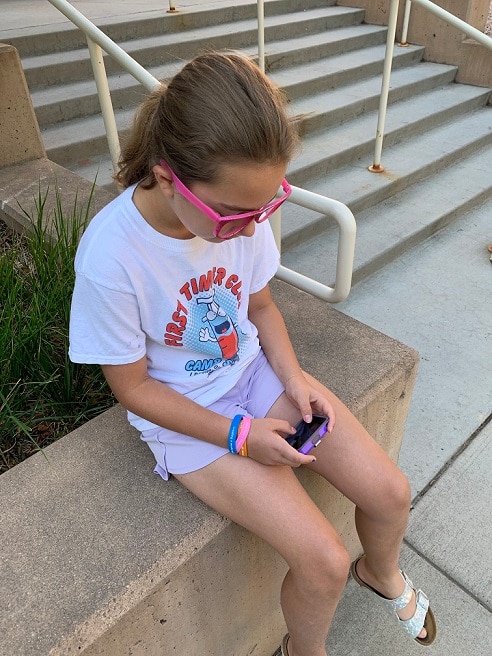 A study participant reviews information on their artificial pancreas device. Credit: University of ColoradoArtificial pancreas effectively controls type 1 diabetes in children age 6 and up: A clinical trial at four pediatric diabetes centers in the United States found that a new artificial pancreas system — which automatically monitors and regulates blood glucose levels and insulin administration — is safe and effective at managing blood glucose levels in children as young as age six with type 1 diabetes. Participants in the study who used the new technology experienced a nearly 11% improvement, which translated to 2.6 more hours per day spent within their blood glucose in range compared to participants in the control group. These findings were published in the New England Journal of Medicine in August.