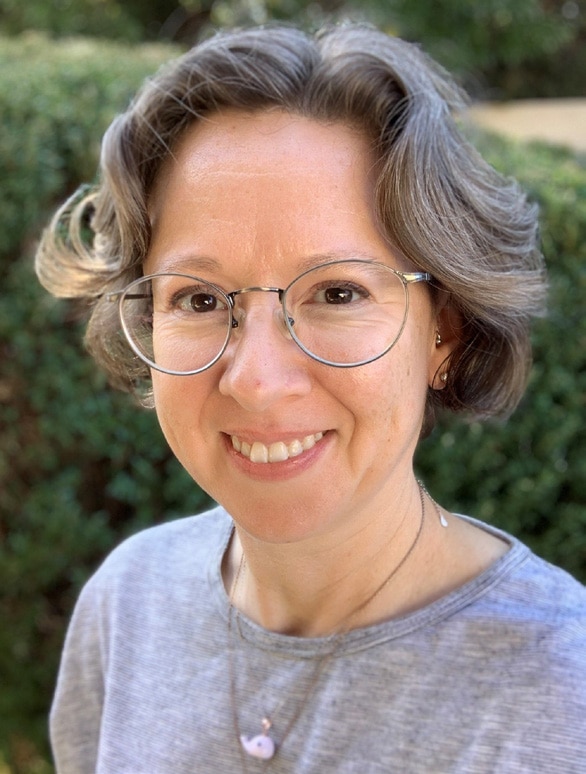 Elena was diagnosed with type 1 diabetes 6 years ago at the age of 40. “It was a total shock,” she recalls, not only for her, but also for her husband, Justin, and daughters Adeline and Laurel, who were teenagers at the time. However, little did Elena know that she would personally have a profound impact on advancing treatment approaches for herself and other people with type 1 diabetes. That impact comes from her dedication to participating in clinical trials testing new technologies for type 1 diabetes management, including the NIDDK’s International Diabetes Closed-Loop (iDCL) Study. “I honestly have lost count,” she says, but “I have been in the neighborhood of 10 to 12 trials.”

Says Elena of clinical study participation: “I would absolutely recommend anyone who is interested in a trial to take a look at what’s available in your area.”

Elena’s journey to participating in clinical trials began soon after her diagnosis when she did research on the Internet to figure out what diabetes management devices might work best for her. She decided to start using a continuous glucose monitor (CGM), which she liked because it let her see changes in her blood sugar levels in real time so that she knew when she needed to administer insulin. Even with the CGM, managing her type 1 diabetes was a lot of work. “It required constant attention,” she says, “I really had to stay on top of it all the time.” Through the Internet, Elena also heard about a peer support conference where people with diabetes got together to share experiences. That conference gave her needed perspective that she was not alone in trying to figure out how to manage her disease, and it was “where I first heard of the idea of getting involved in a clinical trial,” she recalls.

Elena discovered that Sansum Diabetes Research Institute (SDRI) in Santa Barbara, California, was not too far from her home, and they were conducting trials testing new artificial pancreas technologies. Such trials were particularly appealing to Elena because she would be testing devices that could potentially manage her diabetes better than she could with less burden, so it did not take long for her to sign up for her first trial. Since then, Elena has personally witnessed the evolution of artificial pancreas clinical trials—from early trials when she stayed overnight at SDRI and study staff monitored her constantly to ensure that early prototype systems did not cause a medical emergency, to the iDCL trial when device safety had advanced so far that she could do the trial at home without any remote monitoring.

When she first heard about it in August 2018, Elena was very excited about the iDCL trial and about possibly using the Control-IQ artificial pancreas system, so she signed up through SDRI—one of seven participating sites. Participants were randomly assigned to either the Control-IQ group or to the trial’s control (or comparison) group—that is, the group who did not use the advanced system. This group used sensor-augmented pump (SAP) therapy, which includes a CGM and an insulin pump, but not the technology that automatically calculates and administers insulin doses. When Elena heard that she was assigned to the SAP group, “I felt really disappointed,” she admits. However, she quickly realized, “Somebody has to be in the control group because … there has to be some kind of comparison to show that the [artificial pancreas device] works and is effective.”

After 6 months, participants in the SAP group, including Elena, were switched to the Control-IQ system as part of a trial extension phase. The timing for switching to the Control-IQ system could not have been better for Elena—it helped ease her diabetes management burden during some challenging personal times. When she received the Control-IQ system, her younger daughter had recently gotten engaged, so Elena was very busy helping with wedding planning. Even though she was extremely happy for her daughter, she was also soon facing an empty nest, as her older daughter was already married and out of the house. That would be a difficult transition for Elena, particularly because her daughters had been homeschooled and she was used to having them home all the time. After the wedding, she and her husband drove to the Midwest to help the recently married couple move. Between the wedding and the move, it was a chaotic time. “I felt like I had so many things to think about…. I just didn’t have as much mental energy to spare on diabetes,” she remembers. She was happy that she did not have to put nearly as much work into managing her type 1 diabetes as usual—she relied on the Control-IQ system to do it for her. “I really felt like that [Control-IQ] study pump was fantastic,” she states.

Elena and her husband returned home to California from the Midwest, thinking that things would finally calm down. However, just a few days later, the morning of Independence Day 2019 brought more upheaval: a major earthquake. “Everything in my house sounded like it was going to fall down on the ground,” Elena describes. She and her husband spent their holiday cleaning up and feeling fortunate that they were not injured. Then on July 5: another earthquake. “It hit hard,” Elena states, “I could tell this was worse than the one we just had.” All Elena and her husband could do was try to survive while watching their belongings crash to the ground and parts of their house fall apart. Thankfully, they were not hurt, and again she felt grateful to have the Control-IQ system. As she explains, “I didn’t have a single spare second to think about diabetes.”

While using an artificial pancreas system in a clinical trial, Elena says, “I definitely feel like my mental health improved…. I’m not having to babysit my blood sugar 24/7.”

From these experiences, Elena realizes that the benefits of the artificial pancreas system for her were not measured by her traditional diabetes health numbers, such as HbA1c levels, which were already in the recommended range and improved modestly while on the system. Rather, “I definitely feel like my mental health improved…. I’m not having to babysit my blood sugar 24/7, and yet I’m getting as good or slightly better results [managing blood sugar levels] as I was doing on my own.” She also says that the device was a huge help at night. “Prior to using the closed-loop system, I was waking up every night because of diabetes,” she recalls. With the closed-loop system, “I didn’t wake up anymore for high or low blood sugars. I could just sleep as much as I could sleep because the pump was able to handle it…. I woke up every morning with a clean slate.”

Elena also says that a big benefit to using an artificial pancreas system is that a computer, unlike a person, “is unemotional…. It can take care of your blood sugar better than you can because it doesn’t get tired or frustrated or annoyed.” During the trial, the computer was unfazed by serious personal stress—whether it be the happy stress of a wedding or the life-threatening stress of earthquakes. The system managed her diabetes through challenging times when Elena would have had difficulty doing so herself.

As for her clinical trial experiences, “I cannot say enough good things about the study team at SDRI,” Elena says. “I have always felt that they have been encouraging, helpful, and respectful.” She quickly adds: “I would absolutely recommend anyone who is interested in a trial to take a look at what’s available in your area.”

Elena is also happy that her steadfast participation in clinical trials has contributed to the availability of new type 1 diabetes management devices. When she sees people get excited about a new device that she helped test and talk about how it works great for them or their children, she thinks to herself: “That’s really neat. I had something to do with that.” It is only through the generous contributions of Elena and other clinical trial participants that new artificial pancreas devices and other type 1 diabetes management technologies have come to fruition.