The Liver Diseases Virology Section focuses on basic and translational research to understand the mechanisms of virus-related liver disease, to improve treatment and prevention of hepatitis B virus (HBV) and hepatitis C virus (HCV) infections, and to elucidate molecular pathways of viral hepatitis-associated hepatocellular carcinoma (HCC).

Hepatitis B (HBV) and hepatitis C (HCV) infections affect more than 10 percent of the world population. They are the most common cause of liver disease including liver cancer—the fourth leading cause of cancer death. Current treatments for both viruses are effective but do not always work. While an effective vaccine for HBV is available, there is not one for HCV. In order to develop effective vaccines and better treatment approaches, we must understand how molecules, cells, and genes are altered over time in an infected person; how the virus interacts with the host; and how the immune system is affected by the virus. My laboratory focuses on these topics and pursue three approaches to study of HBV/HCV infections and the mechanisms that cause the disease.

Our first approach is to understand how HBV/HCV antivirals work and why they don’t work in some people. We explore the biological reasons that explain why some patients do not respond to treatment. Our second approach is to apply molecular, biochemical, and functional genomic tools to identify and characterize interactions between the virus, viral gene products, and the host. In the third approach, we generate new tools for developing and evaluating vaccines and antivirals by building and improving on currently available models.

Hepatitis B and C viruses together infect more than 10 percent of the world population and are the most common causes of chronic liver disease and hepatocellular carcinoma, which is now the fourth leading cause of death from cancer in the world1. Current therapies for HBV are less than optimal. Recent advances of direct-acting antivirals in HCV therapy have substantially improved the outlook for millions of HCV-infected people. The prospect for a HCV vaccine remains elusive. Given the global public health burden, it is crucial to improve on strategies to control the two infections including more affordable and effective therapies and preventive measures. To achieve this goal, we need to understand viral life cycle, viral mechanisms of productive and persistent infection, virus-host interactions and virus-induced liver injury at the molecular, cellular and genomic levels. The thematic effort of my laboratory focuses on these topics.

While many gaps in our knowledge of HCV still exist, great strides have been made in characterizing the virus and functions of viral genes as well as in unraveling the replication pathway and immunologic mechanisms of liver injury. HCV, like many other viruses, exploits host cellular machinery for productive infection. However, unlike other RNA viruses, HCV has a high propensity to cause persistent infection despite an active host immune response. Thus, it commands unique mechanisms to counteract the various host defenses. HCV gene products have been shown to interact with many host factors and to induce cellular alterations vital for viral replication, persistence and pathogenesis. The development of in vitro systems including infectious cell cultures affords the opportunity to fully characterize viral replication and virus-cell interactions as well as developing novel therapeutics. As some of these antiviral compounds target conserved steps of viral infection, such as viral fusion, they may have broad-spectrum antiviral activities against other important human pathogenic viruses, such as SARS-related viruses.

For HBV, replication and virus-host interactions have been studied extensively. The availability of HBV culture systems and small animal models has greatly advanced fundamental knowledge of the virus and the evaluation of vaccine and therapeutic candidates. However, the complexity of virus-host interactions during HBV infection remains unclear. In addition, chronic infection with both viruses is associated with development of hepatocellular carcinoma (HCC) that carries high morbidity and mortality and is difficult to diagnose and treat. Virus-associated HCC remains poorly understood and is an important unmet need in liver diseases.

We successful adopted the technology of iPSC and hepatocyte differentiation as in vitro and in vivo models to study HBV and HCV infections. We demonstrated that these differentiated, hepatocyte-like cells (HLCs), despite an immature phenotype, are permissive to HCV infection in vitro and mount an interferon response. The HLCs could be engrafted in the liver parenchyma of immunodeficient mice. The HLCs can be maintained for an extended period of time in the liver of the chimeric mouse, where they undergo further maturation and proliferation. These chimeric mice were permissive to infection with HBV and HCV of different genotypes and support long-term infection.

Finally, we have established an active research program on the increasingly important problem of hepatocellular carcinoma in the context of chronic viral hepatitis. We are developing various in vitro and in vivo models to identify and study potentially important procarcinogenic pathways that are triggered by HBV or HCV infection. By leveraging this knowledge, we hope to uncover novel strategies for preventive and therapeutic interventions of this deadly cancer.

Development of small molecule HCV inhibitors
Novel entry inhibitors of HCV infection have been developed in our laboratory and work synergistically with approved anti-HCV drugs. These compounds are also active in an humanized chimeric mouse model infected with HCV 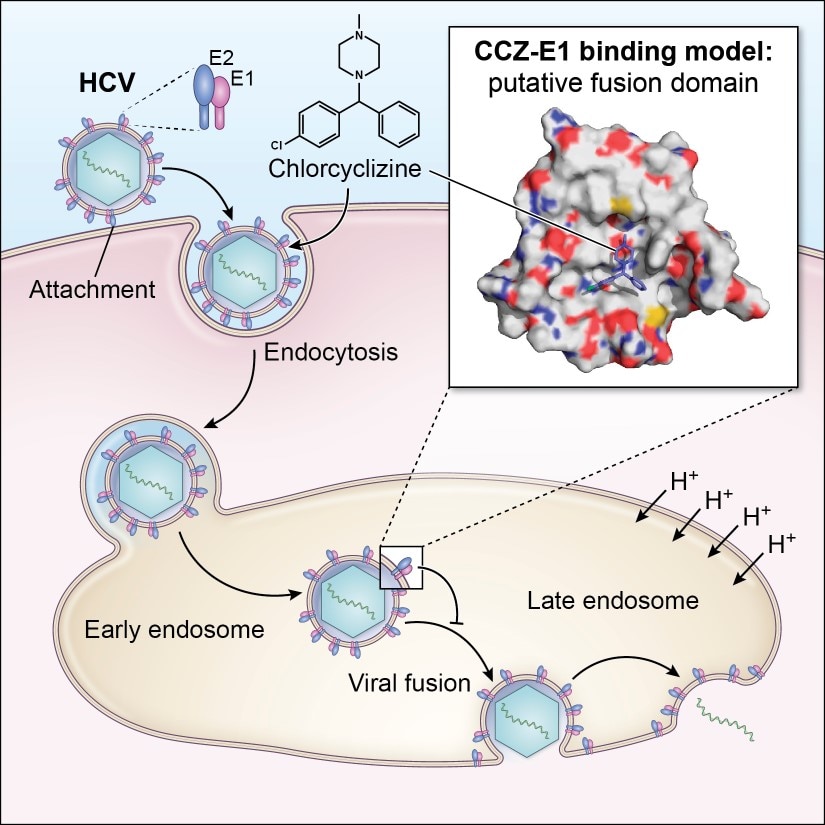 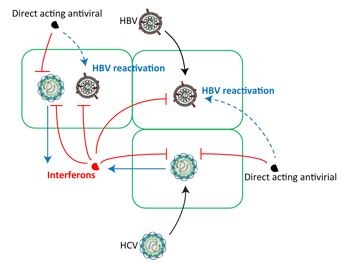 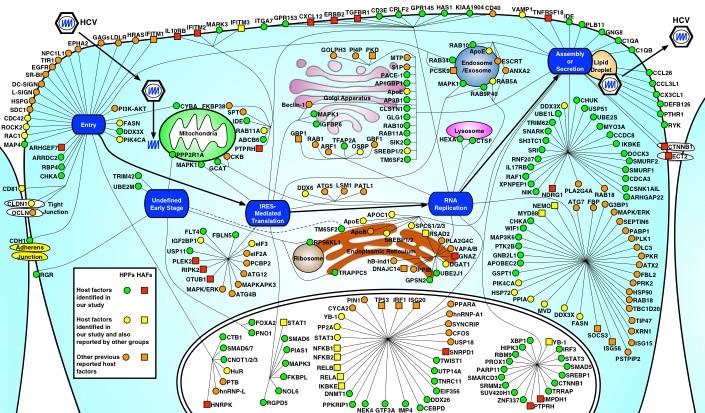 Systems Biology of Host Factors in HCV Life Cycle
Using the complete HCV replication cycle (from entry to secretion) as a framework, all verified HCV host dependencies from this study were placed based on their predominant subcellular localization and relevance to particular stages of the viral life cycle. In addition, multiple datasets from other HCV siRNA screens and existing publications were mined, explored and integrated into a comprehensive up-to-date dataset of HCV interacting host factors. Computational mapping was performed to reconstitute the map that was further refined manually. HPFs (host proviral factors) are shown in red square, HAFs (host antiviral factors) are shown in green circle. Previously published HCV host dependencies that were also identified in this study are shown in yellow, and other known HCV host factors that were not identified in this study are shown in orange (HPF in circle and HAF in square). 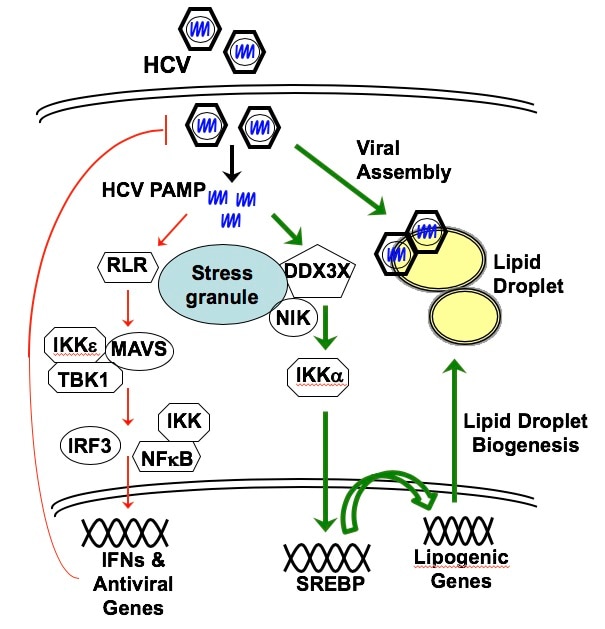 HCV Infection Interferon Response and Lipid Droplet Biogenesis
A proposed model of innate antiviral response and HCV-induced lipogenesis and LD formation in HCV assembly. HCV can activate two distinct pathways. One is the induction of interferon pathway by interaction of HCV PAMP with RIG-I helicase like receptor (pattern recognition receptor) and the other is activation of lipogenic pathway via stress granule, DDX3X and Ikkα, that facilitates HCV assembly. 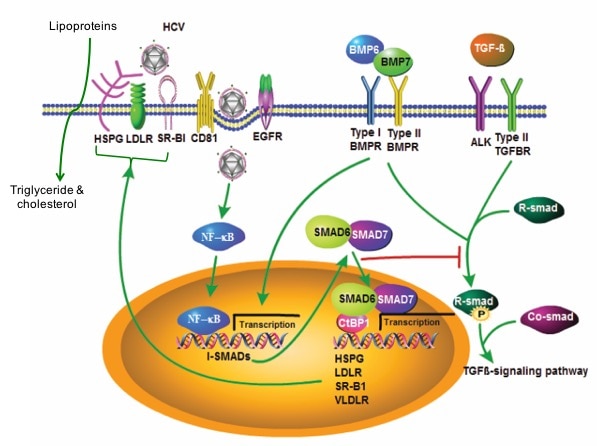 HCV Infection I-SMAD and Lipid Metabolism
A proposed model for I-SMAD-regulated signaling that enhances HSPG expression, cholesterol uptake and HCV entry. HCV entry is mediated by viral binding to HSPGs, LDLR and SR-BI (and other entry factors, not shown) on the host cell surface, thereby triggering a cassette of signaling to facilitate the internalization of HCV virions. HCV infection also induces the expression of SMAD6 and SMAD7, two I-SMADs of the TGF-β signaling pathway via NF-κB regulation. The I-SMADs translocate to the nucleus and transcriptionally activate the expression HSPG core protein and other cholesterol uptake receptors. Increased expression level of heparin sulfate on the cell surface in turn enhances HCV binding. Additionally, the I-SMADs and HSPGs can be induced by BMP6 and BMP7, the ligands in the BMP/TGF-β pathway. 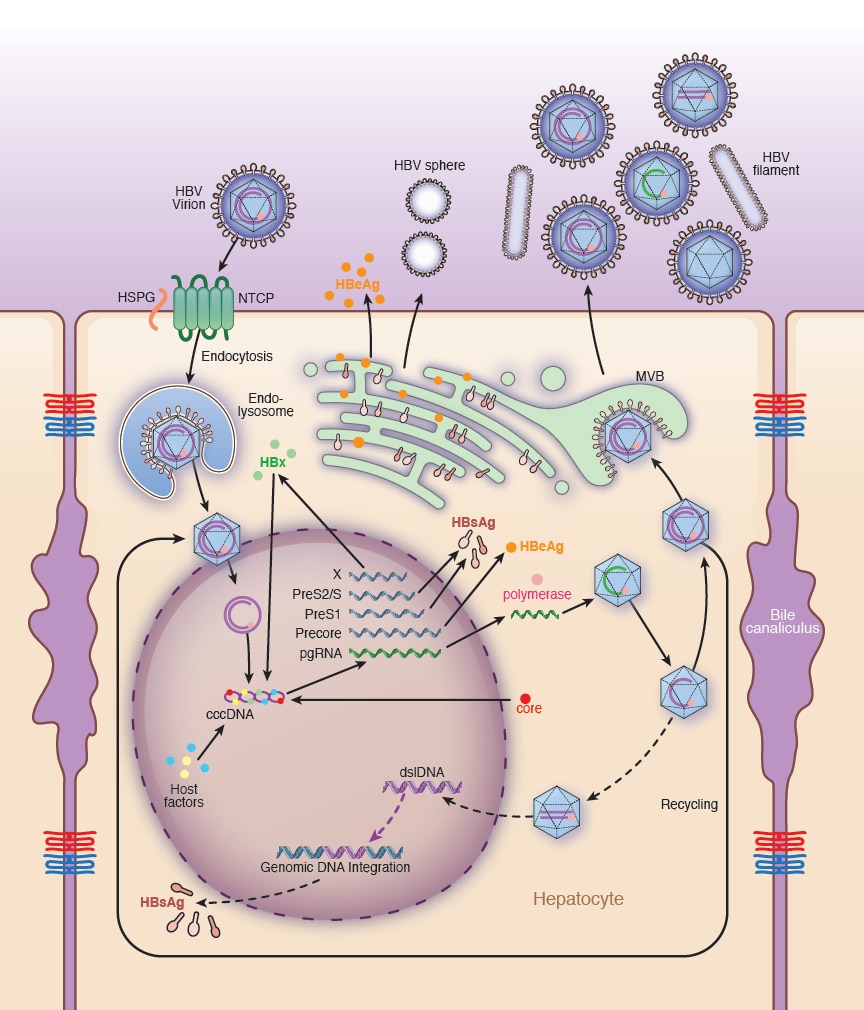 Schematic of HBV replication and drug targets
The virus enters the hepatocyte using the sodium taurocholate cotransporting polypeptide as a receptor. cccDNA is generated by repairing the partially double stranded genome in the nucleus, whereupon viral transcription occurs. Encapsidation of the pregenomic RNA occurs in the cytoplasm via a complex interaction of viral and host proteins. Reverse transcription leading to negative and then positive strand synthesis occurs within the viral nucleocapsid. Viral assembly takes place in the ER. “Mature” nucleocapsids undergo assembly and coating with envelope proteins followed by budding and virion secretion into the blood. Potential targets for drug development are highlighted. 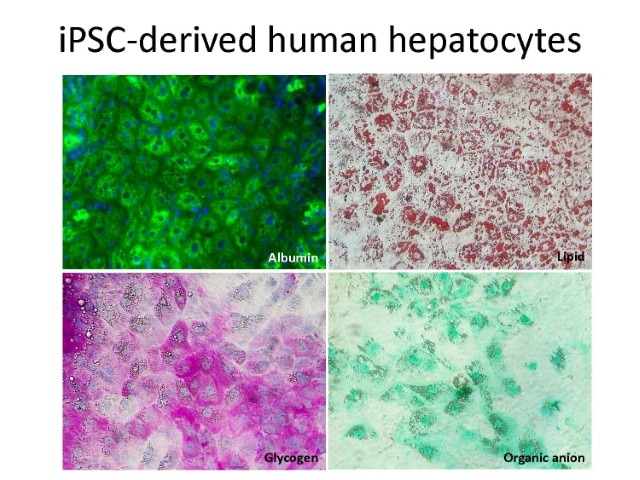 Induction of steatosis by HCV
HCV infection of human hepatocyte-derived cells induces a lipogenic program that results in massive accumulation of lipid droplets (green and yellow structures). This is known as steatosis and is essential for HCV propagation. 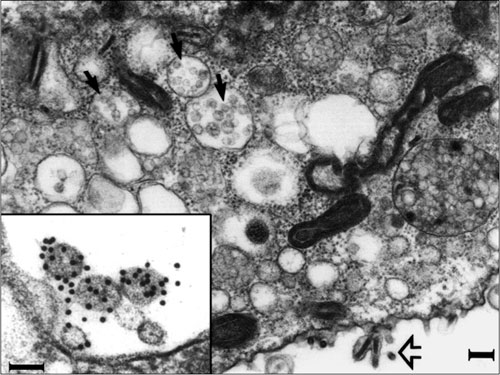 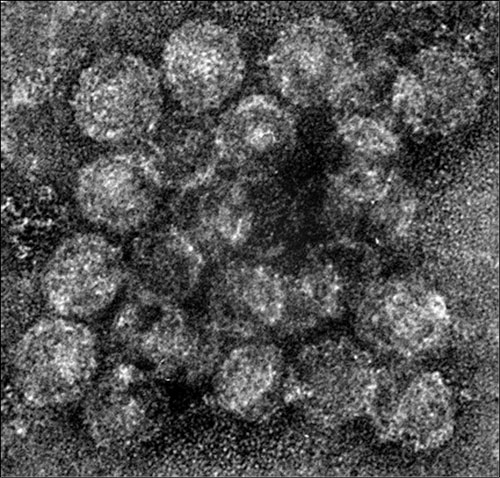 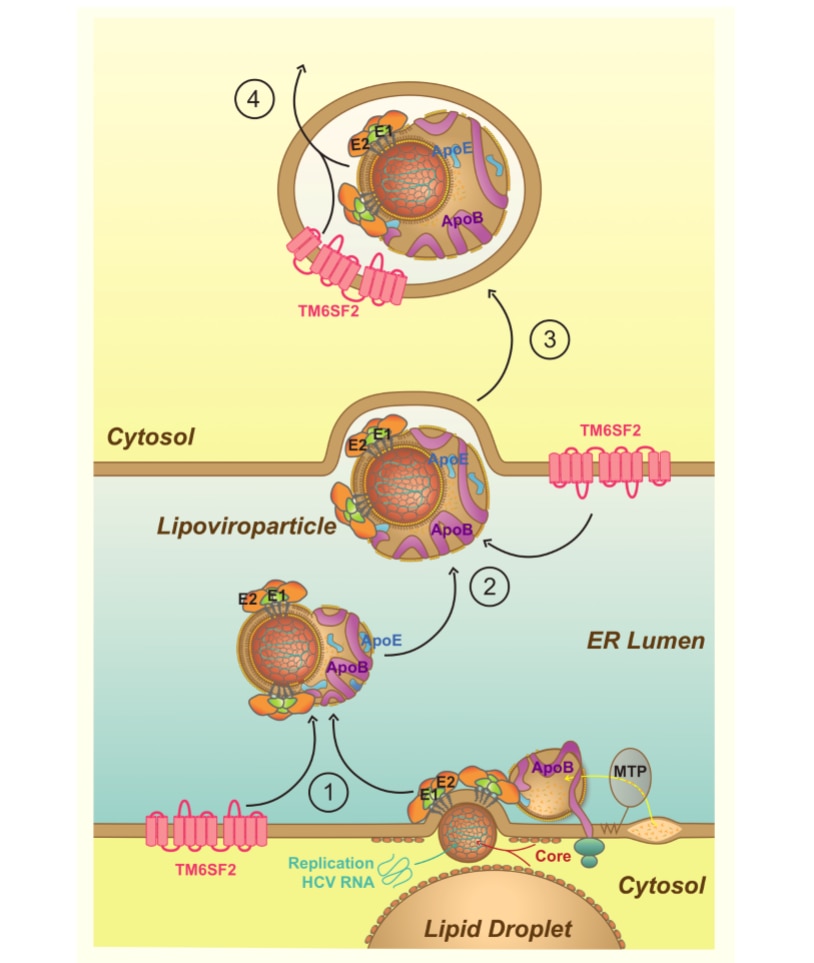 Lipidation of Hepatits C virus by Cellular Protein TM6SF2
During HCV budding inside the ER lumen, apolipoproteins B and E associate with the enveloped virus. Once released into the ER, the nascent virion acquires all the components of lipoprotein (apolipoproteins and lipids) to the infectious form of HCV. Together with MTP, TM6SF2 facilitates lipid loading onto the newly assembled virion during the budding and/or maturation process. 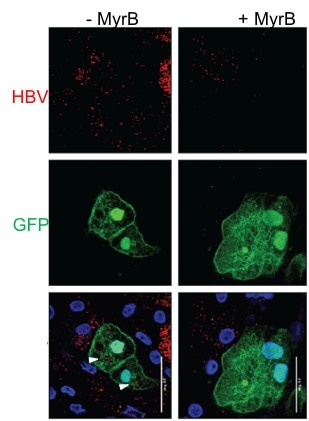 Spreading of HBV in INduced Hepatocyte-Like Cells
iHLCs were infected with HBV for 7 days, and then trypsinized and co-cultured with GFP-lentivirus transduced HLCs with or without Myrcludex B. Eight days after co-culture, RNAscope was used to evaluate HBV replication. White arrowheads indicate spreading of HBV to non-infected GFP-positive cells.