A 25-year journey from exploratory chemistry to drug delivery

A new drug originating in NIDDK has given people with advanced liver cancer a new hope. The drug, Cl-IB-MECA, has so far proven to help people with this disease live longer and without the side effects that commonly occur from other treatments. The discovery of Cl-IB-MECA as a drug, which has anti-inflammatory effects and relieves chronic nerve pain, could not have happened without the basic research beginning in NIDDK’s Dr. Kenneth A. Jacobson’s lab more than two decades ago, combined with a sustained and collaborative follow-up effort since.

Soon after Jacobson’s 1983 arrival to NIDDK as a staff fellow, his research began to focus on understanding the role of adenosine, a molecule that plays an important role in cellular signaling. “As a medicinal chemist, I knew that compounds affecting adenosine receptors had anti-inflammatory effects and wondered if they could be used in cancer therapies,” said Jacobson, now chief of the Molecular Recognition Section in NIDDK’s Laboratory of Bioorganic Chemistry. This observation started Jacobson and his colleagues on a long and ultimately fruitful research journey.

Adenosine receptors help the body adjust to physiological stress, for example, by either boosting the immune response to a threat or suppressing the response when overactivated. Jacobson and his team discovered Cl-IB-MECA in 1993 while developing different chemical agonists and antagonists for adenosine receptors. The drug interferes with critical cell pathways and showed strong promise to selectively destroy human cancer cells.

Jacobson and his team built on their initial discoveries by working with NIDDK’s Technology Advancement Office (TAO) to develop a Cooperative Research and Development Agreement (CRADA) on adenosine receptor agonists with Can-Fite BioPharma company. Subsequently, Cl-IB-MECA has been tested and found to be safe and effective in small- and medium-size (Phase 1 and 2) clinical trials in people with nonalcoholic steatohepatitis (NASH), a type of nonalcoholic fatty liver disease (NAFLD) and, increasingly, a cause of liver cancer.

TAO also assisted in developing an exclusive use license with Can-Fite in 2003. The company obtained the rights to use Cl-IB-MECA as a therapeutic treatment for advanced liver cancer. The drug is currently available to treat people with the disease in Israel through compassionate use when all available treatment options have been exhausted. The U.S. Food and Drug Administration granted approval to begin a larger (Phase 3) clinical trial. If results are successful, the drug will be made available in the United States.

Jacobson’s lab and others at NIDDK work closely with TAO to get essential input on how to protect and promote scientific inventions and discoveries.

“TAO’s mission is to advance the technologies developed within and supported by NIDDK to improve public health, while making it worthwhile for outside licensees such as Can-Fite to invest in putting new drugs through the clinical evaluation process, which can be time-consuming and costly,” said TAO Director Dr. Charles Niebylski.

“The accomplishments of Jacobson and his team tell a great story of what success looks like going from bench to bedside,” said Dr. Betty Tong, who facilitated TAO’s patenting and licensing activities for the Jacobson portfolio. “Validation of Cl-IB-MECA through licensing adds great momentum and synergy to advancing the latest research discoveries from NIDDK.” 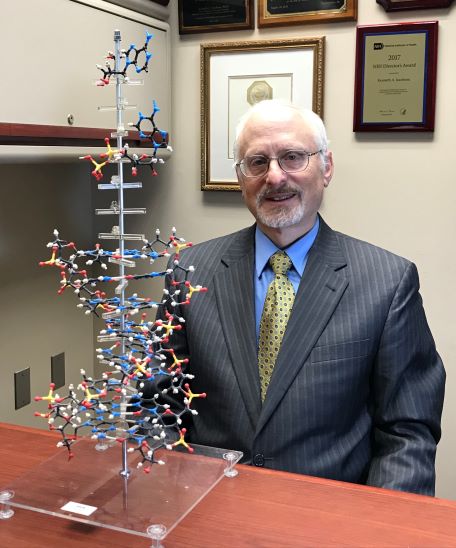 “The discovery of a drug that shows efficacy in advanced clinical trials is a significant translational outcome for medicinal chemistry and biological exploration,” said NIDDK Scientific Director Dr. Michael W. Krause. “Ultimately, this is what the work at NIH aims to do, and we are committed to fulfilling that goal through a comprehensive research process.”

Jacobson and his team are proud that their drug has reached this point, about 25 years after discovery. The lab is now working on a third generation of adenosine drugs targeting other applications, including kidney inflammation and as an alternative to opioids to treat chronic pain. A similar drug from the Jacobson lab, IB-MECA, designated for the treatment of inflammatory and autoimmune diseases, is also under development with Can-Fite and has progressed to Phase 3 clinical trials.

“The road to drug discovery and development can be long, but there is a great satisfaction in following the path and knowing our work will directly help people in need,” Jacobson said.

View a timeline of the research journey

1983
Dr. Kenneth Jacobson joins NIDDK as a staff fellow, begins work on adenosine with famed bioorganic chemist Dr. John Daly
1993
Jacobson discovers the first selective agonists and antagonists of the third adenosine receptor (A3). An A3-selective agonist, Cl-IB-MECA, is shown in the Jacobson lab to induce death in human cancer cells
1994
Discovery of Cl-IB-MECA publishes and patents are filed
1997
The NIDDK Technology Advancement Office and NIH Office of Technology Transfer offices secure intellectual property rights and licensing for Jacobson’s A3 agonists to pharma for drug development
2003
Can-Fite exclusive license is executed. The company begins technology development and is granted approval to begin clinical trials by the FDA and other global regulatory agencies
2014
NIH patents expire and Can-Fite retains rights to use CI-IB-MECA as a therapeutic treatment for liver cancer
2019
Cl-IB-MECA is made available for compassionate treatment in Israel
Future
If large, controlled clinical trials are successful, the drug could eventually be used in the United States and beyond 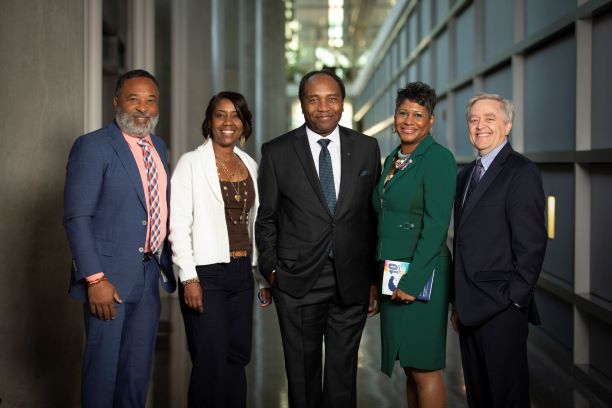 NIDDK Director Dr. Griffin P. Rodgers served as the keynote speaker at the 10th annual Henrietta Lacks Memorial Lecture on October 5 in Baltimore. Hosted by the Johns Hopkins Institute for Clinical and Translational Research (ICTR), the event honors Henrietta Lacks and her extraordinary contribution to medical research, providing a forum to bring together the community and researchers with the shared vision of improving public health. 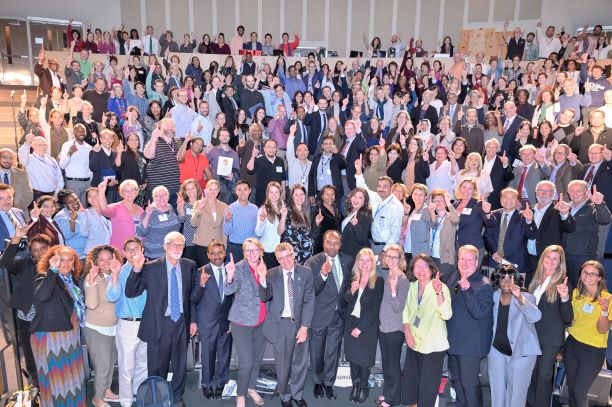 NIDDK employees celebrate the 2019 annual employee appreciation awards. Credit: Marleen Van den Neste On October 21 the NIDDK employee appreciation awards ceremony honored staff in Maryland, Arizona, and beyond for their exceptional service and achievements. NIDDK Director Dr. Griffin P. Rodgers shared highlights and advancements from the past year, including a wide array of research advances, infrastructure improvements, and employee initiatives. In addition to honoring staff members for noteworthy achievements, longtime staff members were honored for their commitment to federal service. See Commendations & Commencements for a full list of awardees.

Semenza, a professor at Johns Hopkins University School of Medicine in Baltimore, is known for his groundbreaking discovery of hypoxia-inducible factor 1, or HIF-1, the protein that switches genes on and off to help cells cope with low oxygen levels. This finding led to a greater understanding of how low oxygen levels impact a variety of disorders including cardiovascular disease and tumor growth. Semenza’s research continues to explore the role of HIF-1 in the biological mechanisms of cancer, ischemia, and chronic lung disease, and could inform new therapeutic pathways for these and other diseases. An NIDDK grantee from 1990 to 2002, Semenza has also received support from the National Institute of General Medical Sciences, National Cancer Institute, and National Heart, Lung, and Blood Institute.

Getting to know: Dr. William Cefalu

In August, NIDDK welcomed its newest Division Director, Dr. William T. Cefalu, who leads the Division of Diabetes, Endocrinology, and Metabolic Diseases (DEM). Alyssa Voss spoke to him about joining the NIH, his vision for the future of DEM research, and what he likes to do in his spare time.

What led you to become an endocrinologist?

When I started my medical education, I knew I wanted to pursue an academic and research career no matter what subspecialty I decided to enter. I became fascinated with endocrinology as it is truly a discipline that involves study of every organ system in the body, given the role hormones have in regulating the body’s functions.

What brought you to NIH?

NIH has earned its reputation as the premier biomedical research institution in the world. Being part of the NIH team and contributing to making a difference in addressing chronic diseases in our country by supporting and directing research efforts is the opportunity of a lifetime. Such an opportunity is one for which I have worked my entire career to achieve. I can’t think of a more important or more meaningful career if your interest is in research and you desire to have a favorable impact on public health.

What is your vision for the division?

My goal for the next five to ten years is to make sure we maintain research excellence for the division and continue to support innovative research programs whose goal would be to reduce the burdens of diabetes and other metabolic diseases. I’m getting to know the incredibly talented scientific staff and getting feedback on what is working well in the division and what may need to change. The next step is to evaluate our scientific priorities to make sure we stay ahead of the curve and continue to address the major scientific questions for disease states that need to be answered. There is a saying in hockey that you should “skate to where the puck is going, not where it has been.” Essentially, this means we have to continue to evaluate trends in science and to look to the future at all times. Finally, our research success can only be realized if we have the best and brightest scientific staff and provide them with the resources and support they need to succeed. Supporting workforce excellence and satisfaction are critical to the success of our research efforts for the division and will remain a priority.

What advice do you give to people interested in a research career?

My advice to someone anticipating a research career is to make sure you pursue an area of science that really piques your interest and then put in the work! If you are not interested in a topic, it’s not likely you’ll put in the work to succeed. Secondly, find a mentor that cares and will provide critical feedback. Only when someone questions your direction and provides an honest critique, do you really think about and defend your position. And don’t be afraid to fail. I learned more from experiments and projects that failed than those that went as planned. Finally, read, listen and ask questions of your peers. Sharing knowledge and learning from colleagues is what is so special about a research career.

What are your interests outside NIH?

I like to exercise and run many days a week in an effort to stay in shape. I enjoy outside activities such as hiking, camping, and backpacking — activities that have led to some of my most memorable family vacations with my wife and two sons. Over the last decade, I have been doing longer treks for weeks at a time in the Sierra mountain range. In most cases, I go alone — it helps me “recharge the batteries.”