What is renal tubular acidosis?

Renal tubular acidosis (RTA) occurs when the kidneys do not remove acids from the blood into the urine as they should. The acid level in the blood then becomes too high, a condition called acidosis. Some acid in the blood is normal, but too much acid can disturb many bodily functions.

There are three main types of RTA.

Type 3 RTA is rarely used as a classification now because it is thought to be a combination of type 1 and type 2 RTA. 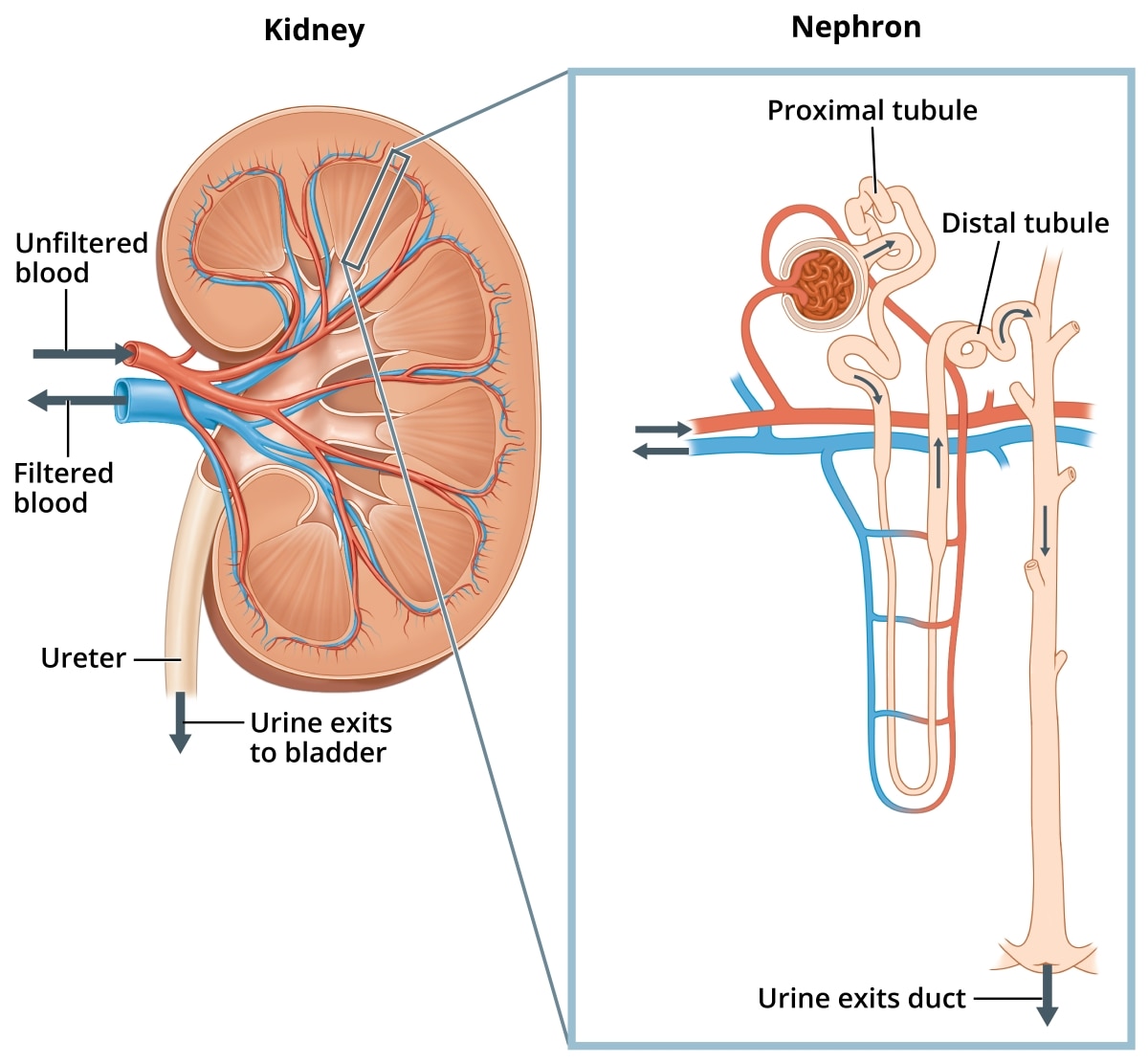 Structures in the kidney called nephrons filter your blood and remove wastes, such as acids, which go to your bladder and leave the body in your urine.

How common is RTA?

RTA is a rare disease that is often misdiagnosed or undiagnosed,1 making it difficult to determine the true frequency in the general population.2

Who is more likely to have RTA?

You are more likely to have type 1 RTA if you inherit specific genes from your parents or if you have certain autoimmune diseases such as Sjögren’s syndrome or lupus.2

If you have Fanconi syndrome or are taking medicines to treat HIV or viral hepatitis, you are more likely to have type 2 RTA.1 People who inherit genes for type 2 RTA from their parents may also have it. In adults, type 2 RTA can be a complication or side effect of multiple myeloma,3 exposure to toxins, or certain medications. In rare cases, type 2 RTA occurs in people who experience chronic rejection of a transplanted kidney.4

If you have low levels of the hormone aldosterone, cannot urinate freely because of an obstruction, or had a kidney transplant, you are more likely to develop type 4 RTA.1 One in five people develop type 4 RTA if they experience rejection of a transplanted kidney or are taking immunosuppressive medications.1

What are the complications of RTA?

Other diseases and conditions related to type 1 RTA include

In people with type 4 RTA, high levels of potassium in the blood can lead to muscle weakness7 or heart problems, such as slow or irregular heartbeats and cardiac arrest.8

What are the signs and symptoms of RTA?

The major signs of type 1 RTA and type 2 RTA are low levels of potassium and bicarbonate—a waste product produced by your body—in the blood. The potassium level drops if your kidneys send too much potassium into your urine instead of returning it to the blood.

Because potassium helps regulate your nerve and muscle health and heart rate, low potassium levels can cause

What are the causes of RTA?

Type 1 RTA may be inherited. Researchers have identified at least three different genes that may cause the inherited form of the disease.2 People with sickle cell anemia or Ehlers-Danlos syndrome, which are also inherited, may develop type 1 RTA later in life.

However, type 1 RTA may develop because of an autoimmune disease, such as Sjögren's syndrome or lupus, that can affect many parts of the body. These diseases may interfere with the removal of acid from your blood.

Type 1 RTA can also be caused by certain medications, including some used for pain and bipolar disorder, conditions causing high calcium in the urine, blocked urinary tract, or rejection of a transplanted kidney.

Type 2 RTA can also be caused by acute lead poisoning or chronic exposure to cadmium. It can also occur in people treated with certain medications used in chemotherapy and to treat HIV, viral hepatitis, glaucoma, migraines, and seizures.

Type 4 RTA can occur when blood levels of the hormone aldosterone are low or when the kidneys do not respond to the hormone. Aldosterone directs the kidneys to regulate the level of sodium, which also affects the levels of chloride and potassium, in the blood.

Certain medicines that interfere with the kidney’s task of moving electrolytes between your blood and urine may also cause type 4 RTA. Some of these include

Type 4 RTA can also occur when diseases or an inherited disorder affect how the kidneys work, such as

Your health care professional will review your medical history and order blood and urine tests to measure the levels of acid, base, and potassium in your blood and urine. If your blood is more acidic than it should be and your urine is less acidic than it should be, RTA may be the reason, but a health care professional will need to rule out other causes.

If you are diagnosed with RTA, information about the sodium, potassium, and chloride levels in your urine and the potassium level in your blood will help identify which type of RTA you have.

For all types of RTA, drinking a solution of sodium bicarbonate or sodium citrate will lower the acid level in your blood. This alkali therapy can prevent kidney stones from forming and make your kidneys work more normally so kidney failure does not get worse.

Infants with type 1 RTA may need potassium supplements, but older children and adults rarely do because alkali therapy prevents the kidneys from excreting potassium into the urine.

Children with type 2 RTA will also drink an alkali solution (sodium bicarbonate or potassium citrate) to lower the acid level in their blood, prevent bone disorders and kidney stones, and grow normally. Some adults with type 2 RTA may need to take vitamin D supplements to help prevent bone problems.

People with type 4 RTA may need other medicines to lower the potassium levels in their blood.

If your RTA is caused by another condition, your health care professional will try to identify and treat it.

How can I prevent RTA?

Inherited types of RTA cannot be prevented,10 and most of the disorders that cause RTA are not preventable.

How does eating, diet, and nutrition affect RTA?

Researchers don’t yet know whether a diet low in acidic foods can have a positive effect on RTA.

The NIDDK conducts and supports clinical trials in many diseases and conditions, including kidney diseases. The trials look to find new ways to prevent, detect, or treat disease and improve quality of life.

What are clinical trials for RTA?

Clinical trials—and other types of clinical studies—are part of medical research and involve people like you. When you volunteer to take part in a clinical study, you help doctors and researchers learn more about disease and improve health care for people in the future.

Researchers are studying many aspects of RTA, such as

Find out if clinical studies are right for you.

What clinical studies for RTA are looking for participants?

You can find clinical studies on RTA at www.ClinicalTrials.gov. In addition to searching for federally funded studies, you can expand or narrow your search to include clinical studies from industry, universities, and individuals; however, the National Institutes of Health does not review these studies and cannot ensure they are safe. Always talk with your health care provider before you participate in a clinical study.